The effects of black cumin seed powder, papaya seed powder, and mustard seed powder on broiler chickens' growth and blood indices were investigated. The basal diets (starter and grower) were formulated and divided into five portions.  The first portion (T1) had no supplementation; portion two (T2) had 1.1 g/100g oxytetracycline (OT) supplementation. 15g/kg papaya seed powder, mustard seed powder, and black cumin seed powder were added to portions three (T3), four (T4), and five (T5), respectively. The haematological indices were not significantly affected by the dietary treatments. The birds' relative growth rate was improved by oxytetracycline, papaya, mustard, and black cumin dietary supplementation. The serum alanine aminotransferase concentration of the broiler chickens in T1 was not statistically significantly different compared to T2, T3, and T4. Birds in treatments T1 and T2 had serum albumin concentrations that were comparable to those fed T3 and T4 supplemented diets but statistically lower (p <0.05) than T5. Weekly growth rate and relative growth rate were significantly improved under T3 and T4.

The poultry industry’s importance in terms of a country’s socio-economic growth cannot be overstated, as it plays a critical role in providing animal proteins for the growing population in a timely and cost-effective manner. [1]. The use of antibiotics as growth promoters in animal production has been a source of concern due to their harmful effects on human health and their ever-increasing cost. [2]. Additionally, the possible role of antibiotic growth promoters in developing antimicrobial resistance in humans has prompted the ban of its use in many developed countries; and such activity is also recommended for other low-income and middle-income countries [2]. Furthermore, there is an increased awareness of the consumers regarding the dangers of consuming meat from animals produced with synthetic chemicals and major limits on antibiotic growth promoters in meat production in several countries [3]. Therefore, the search for alternative and safe growth-promoting compounds became widely required [4][5].

Recently, the medicinal or pharmacological properties of papaya seed, black cumin seed, and papaya seed were reported [6]. Furthermore, the effects of supplementing broiler chickens with papaya leaf and seed powders composite mix on enhancing growth efficiency characteristics and decreasing serum alanine aminotransferase and cholesterol levels were studied [7]. It was previously shown that phytogenics might affect blood parameters [8][9]. Blood haematological variables represent an effective means of assessing the health and nutritional status of animals in feeding trials [5][10]. There is currently inadequate data on the effects of supplementing broiler chickens with papaya, mustard, and black cumin seed powders on growth, haematological indices, and serum biochemical parameters. Therefore, this study aims to investigate the effects of these phytogenics on the aforementioned indices and parameters.

Collection and analysis of seeds

The papaya (Carica papaya) seeds were obtained from ripe fruits. The seeds were washed, drained, and shade dried. The brown mustard (Brassica juncea) and black cumin (Nigella sativa) were procured from northern Nigeria. The black cumin (BSM), papaya (PSM), and mustard (MSM) seed were milled (100µm particular size), and seed powders were obtained. The proximate compositions and phytoconstituents of prepared seed powders have been mentioned previously [11] and are shown in (Table 1). 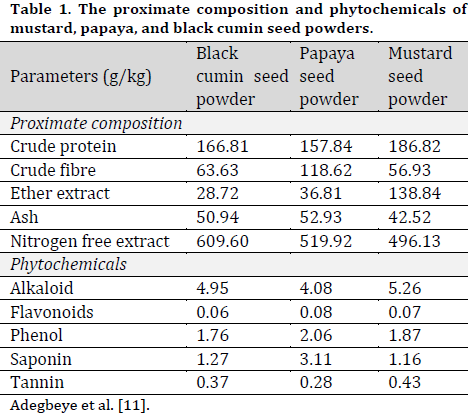 The composition of the broiler chicken basal diets formulated according to NRC specifications [12] for the starter and grower phases was stated in [11] and shown in (Table 2). After that, these basal diets were divided into five equal portions. Portion one (T1) was not supplemented; portion two (T2) was supplemented with 1.1g/100g oxytetracycline (OT). The third (T3), fourth (T4), and fifth (T5) portions were supplemented with 15g/1000g of PSM, MSM, and BSM, respectively. 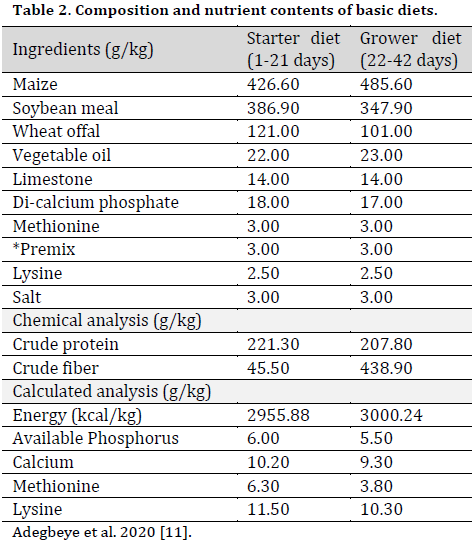 All applicable National Regulations and Institutional Policies for animal care and use were followed during animal research. The Research and Ethics Committee of the Department of Animal Science, Joseph Ayo Babalola University (JABU), Ikeji Arakeji, Nigeria, granted permission to use animals and the animal protocol.

The rate of growth

The viability percentage (V% ) of the birds was registered daily and determined as follows [13]:

Collection and examination of blood samples

Three birds per replication were randomly picked, and 4ml blood samples were obtained from the brachial vein using a syringe and needle. The blood was dispensed into EDTA venojects for haematological indices determination on day 21 (3 weeks mark) of the experiment. Elarabany’s method [14] was used to assess the red blood cells (RBC), packed cell volume (PVC), haemoglobin concentration (Hbc), white blood cells (WBC), granulocytes (GRA), lymphocytes (LYM), and monocytes (MON). The second round of bleeding was carried out on day 42 of the experiment (6 weeks mark). About 8 ml of blood was dispensed equally into EDTA venojects and plain venojects for haematological and serum biochemical indices determination, respectively. The haematological indices were determined in the same way as it was done on day 21. The serum proteins (total protein, albumin, and globulin), as well as serum enzymes (aspartate aminotransferase [AST] and alanine transaminase [ALT]), were determined according to [5].

Analysis of the data

The following model was used in a fully randomized system: Yij = µ + ai + eij, where Yij= any of the response variables; µ = the overall mean; ai= effect of the ith treatment (i = diets 1, 2, 3, 4 and 5) and eij= random error due to experimentation. Using SPSS version 20, all data obtained at weeks 3 and 6 were subjected to analysis of variance (ANOVA). Duncan multiple range test of the same statistical kit was used to look at the variations between treatment means.

Phytogenics effect on the weight, growth, and viability of the broiler chickens

Phytogecnics effect on the haematological indices of the broiler chickens

Table 3. Effect of different seed powder supplements on hematological indices of broiler chickens at 3 and 6 weeks of age.

Phytogenics effect on the serum biochemical indices of the broiler chickens

Dietary supplements had no significant effect on AST, creatinine, total protein, or globulin. The ALT serum concentration in birds fed with the diet supplemented with black cumin seed powder (T5) was statistically similar to those fed with T2, T3, and T4, but was significantly higher (P<0.05) than that of control (T1). The concentration of serum albumin recorded in the birds fed with T5 diet was similar to T3 and T4 but statistically higher (P<0.05) than T1 and T2 (Table 4).

The chemical composition profiles of the phytogenics used in this study suggest the health-supportive properties of these supplements when being used in chick’s dietary programs. Secondary metabolites such as phenol and flavonoids present in the supplements have improved animal antioxidant status and antimicrobial activity [15]. Saponins have also been shown to reduce cholesterol absorption through a physiochemical interaction within the lumen [16][17].  The stability of broilers viability percentage of the birds across the various dietary treatments indicates, to some extent, the suitability of the dietary supplements and the supplementation levels used in the study for typical growth performance of the experimental birds [7][17]. The increased average weekly weight gain and relative growth rate observed in treatments T3 and T4 were consistent with previous findings [5][6]. The improved relative growth rates observed in treatments T2, T3, T4, and T5 indicate that certain phytochemicals present in the used phytogenics have antibiotic properties comparable to oxytetracycline, resulting in reduced enteric disorder, improved health status, and improved nutrient utilization [3][7][11].

The haematological indices are reported as an indicator of normal physiological functions in animals and a reliable tool in the diagnosis of many diseases [10][18]. Considering the use of feed supplements, the obtained stability of haematological indices, including RBC, WBC, PCV, HBc, LYM, MCHC, MCV, MCH, GRA, and MON means that feed supplements did not have a detrimental impact on the usual hemopoiesis in the birds or on their normal health status at 3 and 6 weeks marks. According to [10], the WBC and their differentials (lymphocytes, granulocytes, and monocytes) are involved in fighting off infection, defending the body against foreign organisms’ invasion, and in the production and transportation/distribution of antibodies. The occurrence of leukocytosis is indicative of problems such as infection, stress, trauma, allergy, or specific diseases [19]. Furthermore, it is suggested that the bacterium found in the liver, spleen, kidneys, thymus, and heart could induce the development and release of leukocytes into the bloodstream [20]. However, the steady counts of WBC recorded in broiler chickens in T1, T2, T3, T4, and T5 implies the absence of chronic infections that could have caused deviation or alteration in the normal count of the white blood cells [19].

The concentrations of ALT and AST (enzymes associated with cellular metabolism) varied between treatments. Thus, the elevated concentration of ALT in the plasma implies hepatic cell loss of integrity, indicating cellular damage [25]. The relatively higher ALT concentration recorded in treatment T5 compared to T1 (control) implies that continuous use of this dietary supplement for broiler chicken may lead to health impairment in the form of liver cells integrity compromise. The elevated ALT concentration recorded in the experimental birds fed with T5 compared to T1 may be due to the variation in the chemical composition. For instance, the flavonoids and phenol contents are relatively lower in BSM compared to PSM and MSM. The roles of flavonoids and phenol on hepatoprotective and antioxidant effects were reported in [26] and [27]. The flavonoids are highly effective polyphenolic compounds in scavenging for free radicals due to their molecule formation harboring a mobile hydrogen-containing aromatic ring with hydroxyl groups [28]. On the other hand, AST values in this study fall within the normal range (175.75-182.56 U/L) [29]. The higher serum albumin concentration recorded in birds fed with T5 suggests that BSM supplementation triggers haemo-concentration (due to dehydration or shock) and lipaemia [19]. Nonetheless, the serum albumin concentrations for broiler chickens fed with seed powder supplemented diets in this study are within the usual range (21.00–34.50 g/l) [30]. However, additional studies are required to point out the possible bioactive compounds responsible for these observations.

The various seed (papaya, mustard, and black cumin) meals have phytochemicals of pharmacological importance. The inclusion of BSM at the level 15 g/kg in the broiler chicken diet may negatively affect the liver of the birds after a relatively long period. On the other hand, weekly growth rate and relative growth rate were improved by supplementing starter and finisher phase diets with papaya and mustard seed powder at 15 g/kg in both phases.