This study was conducted to investigate the effect of the medium type (half-strength MS medium and MS free medium) and the extracellular products of cyanobacteria (Oscillatoria tenuis) that were grown under photoperiods of 8 or 16 h day-1 on the shoot proliferation and rooting of in vitro ‘Barhee’ date palm ciltures. MS free medium failed to establish half-strength MS medium results, which indicates that the medium could not sustain cultures requirments during shoot proliferation and rooting phase. On the other hand, half-strength MS medium supplemented with extracellular products of O. tenuis grown at 16 h day-1 photoperiod recorded the best results in regards of response to direct organogenesis and rooting.

Date palm trees Phoenix dactylifera L. is one of the economically significant fruit with high nutritional value. With more than 600 cultivars spread throughout Iraq, ‘Barhee’ date palm cultivar is among the finest commercially cultivated varieties in Iraq due to the quality of its fruits [1]. The traditional method of propagating the date palm in Iraq is offshoots proliferation. However, ‘Barhee’ cultivar is considered one of the date palm cultivars that produce a small number of offshoots. Therefore, various researches were conducted to test the micropropagation method potentials of this cultivar [2].

Tissue culture is defined as the system used to culture plant organs, tissues, or cells in controlled industrial environments with a later incubation under sterile conditions. The success of any tissue culture work depends on the nature of the medium used for propagation. In date palm, It has been found that the best media to be used is Murashige and Skoog (MS) medium [3]. It was reported that the use of full-strength MS salts gave the highest percentage of adventitious bud formation compared to the use of half the strength of MS salts. This result refers to the importance of a high nitrogen level in culture medium in order to support the formation of shoots in date palm tissues cultivated by in vitro culture [4].

On the other hand, tissue culture projects greatly depend on the used growth regulators, vitamins, and antibiotics. On this basis, the use of blue-green algae in the agricultural system may help overcome some obstacles that affect micropropagation. Blue-green algae produce various vitamins, antibiotics, and other effective chemical compounds, including growth regulators [5, 6]. Among these substances are gibberellins, auxins, cytokinins, ethylene, abscisic acid, and jasmonic acid [7, 8]. Therefore, the extracts of these algae can be used to improve tissue culture media. Previous reports indicated that these algae have the ability to produce these compounds in their cells, which may be excreted outside or accumulated inside their cells [9]. Blue-green algae media were used in place of MS salts to propagate Bacopa monnieri aquatic plant [10]. Proper growth of shoots was obtained in the medium containing blue-green algae, with sucrose and kinetin at 2 mg L-1 concentration. These shoots were able to survive for a long time of culture. Another study reported that the nodal segments of Wedelia trilobata were found to reproduce better on the medium containing MS salts supplemented with 10% of the biomass water extract (BWE) of the blue-green algae (Phormidium subincrustatum) compared to the control treatment [9]. Therefore, the current study investigates the effectiveness of adding Oscillatoria tenuis cyanobacteria extracellular products (CEP) to the propagation culture medium of date palm, ‘Barhee’ cultivar in the direct organogenesis, proliferation, and rooting stages.

A pure culture of blue-green algae (Cyanobacteria) Oscillatoria tenuis (Fig. 1 B) was obtained from the Algae Laboratory in the Department of Life Sciences, College of Pure Sciences Education, University of Basrah. The algae under study were grown by using a sterile inoculum in a sterile BG11 liquid medium that was placed in sterile glass tanks with dimensions of 30 x 50 x 40 cm (Fig. 1, C) and by using a growth incubator at a temperature of 25 ± 2 °C and under a light density of 60 µmol m-2 s-1 from a fluorescent light source. The algae were grown under two different light periods of (16:8) h and (8:16) h (Light:Darkness). The cultures were stirred regularly to obtain a growing algae mass. The cyanobacteria extracellular products were extracted by taking 5 grams of the freeze-dried algae biomass and then adding 100 ml of water. The extract was then placed on a heater-magnetic stirrer at a temperature of 100 °C for 20 minutes, and then the product was cooled and filtered using Whatman No. 1. CEP extract was stored in sterile containers at a temperature of 4 °C until use.

Plant material and in vitro culture

The study was conducted in the Plant Tissue Culture Laboratory of Fadak Agricultural Company in Abi Al-Khasib district, Basrah governorate, from 2017-2018. ‘Barhee’ date palm offshoots were obtained at the age of 3-4 years from one of Abi Al-Khasib date palm orchards as a source of explants. These offshoots were dissected down to the shoot tips (Fig. 1 A). The shoot tips were then placed for 24 hours in the refrigerator in an antioxidant solution consisting of citric and ascorbic acids in sterile distilled water at concentrations of 150 and 100 mg L-1, respectively. Then, shoot tips were sterilized for 60 minutes with 0.001% Mercuric chloride (HgCl2) solution supplemented by several drops of Tween 20 to increase the sterilization efficiency of the explant surfaces. The shoot tips were then cultured in MS medium [3], consisting of 4.43 g L-1 of ready MS salts, 60 g L-1 Sucrose, 185.50 mg L-1 Sodium orthophosphate (Na2H2PO4.2H2O), 20 mg L-1 D-Pantothenate calcium, 80 mg L-1 Adenine sulfate, 2 g L-1 of Calcium nitrate tetrahydrate, 100 mg L-1 Inositol, 0.04 mg L-1 Thiamin-HCl, 500 mg L-1 of Polyvinyl pyrrolidone, and growth regulators: 0.2 mg L-1 of benzyl adenine (BA), 0.2 mg L-1 of isopentenyl adenine (2ip), 0.2 mg L-1 kinetin, and 6.0 mg L-1 of naphthalene acetic acid (NAA). Direct adventitious bud initiation was induced by eight weeks of in vitro culturing. CEP extract was added to shoot proliferation and rooting media (100 ml per culture medium) as shown below:- 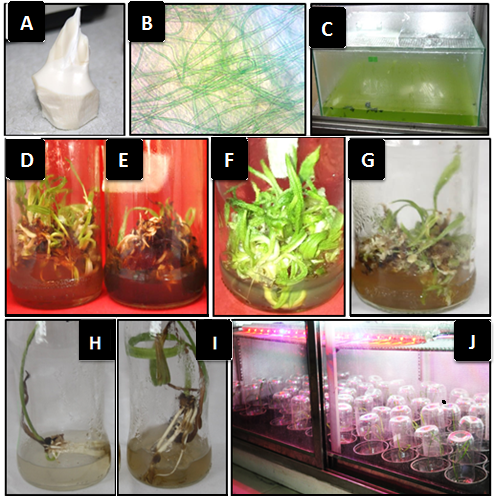 The studied traits were:

The experiment was conducted in a factorial design with two factors based on a Complete Randomized Design (CRD) with three replicates and ten observations per replicate. The data were analyzed statistically using the analysis of variance on Genstat Ver.17. The means were compared using the revised least significant difference (R-LSD) at a probability level of 5% [11].

The treatment of half-strength MS medium with the addition of CEP was significantly superior in terms of response percentage to direct shoot formation 93.75% compared to MS free medium (88.12), as seen in (Table 1) and (Fig. 1 D and E).

As for photoperiod length of algae, the MS medium supplied with extract of CEP of algae that grew at a photoperiod of 16 h day-1 recorded a significantly higher percentage of response to the shoot proliferation was (95%) compared to that grew at 8 h day-1, recorded the lowest percentage of response to direct proliferation reached 86.88% (Table 1).

The interaction between two factors showed that both  0MS+CEP and 1/2MS+CEP resulted in the same response to shoot organogenesis when the medium was supplemented with CEP of algae grown under 16 h day-1 photoperiod.

Table 1. Effect of MS salts presence and CEP of algae grown under two different photoperiods on the percentage of response to direct shoot organogenesis (%) of date palm ‘Barhee’ cultivar after eight weeks of culturing.

Table 2. Effect of MS salts presence and CEP of algae grown under two different photoperiods on the number of direct shoots per explant of date palm ‘Barhee’ cultivar after eight weeks of culturing.

Table 3. Effect of MS salts presence and CEP of algae grown under two different photoperiods on the percentage of response to rooting shoots (%) of date palm ‘Barhee’ cultivar after eight weeks of culturing.

Table 4. Effect of MS salts presence and CEP of algae grown under two different photoperiods on the number of primary adventitious roots per shoot of date palm ‘Barhee’ cultivar after eight weeks of culturing.

The date palm plantlets of ‘Barhee’ cultivar were acclimatized after the formation of good foliage and root system for them with a success rate of 85% after planting them in plastic pots containing a mixture of sand and peat moss in a ratio of 3: 1, watering them and covering them with transparent plastic covers and placing them in the growth room at a temperature of 27-28 ° C, at 16-hour light day-1 for eight weeks (Fig. 1, J).

It was reported that the extracellular products of blue-green algae (CEP) contain substances similar to auxins, cytokines, gibberellins, and jasmonic acid that stimulate growth, cell division, elongation, and differentiation. These substances overlapped with the growth regulators added to the medium, which positively affected the vegetative characteristics of the direct shoots and the root characteristics in 1/2MS medium [7, 8, 9, 12, 13].

On the other hand, the reason for the poor response to direct organogenesis, poor rooting, the small number of shoots, and roots in 0MS medium is the low content of total nitrogen, phosphorus, and potassium in the medium. This means that the cyanobacteria extracellular products added to the medium were incapable of providing the cultures with the necessary materials for the different biological activities. This deficiency has negatively affected the bioprocesses that occur in the cells of the cultured tissues.

The superior results of supplementing 1/2MS with CEP extracted from algae exposed to a 16 h day-1 photoperiod compared to that grown under 8 h day-1 is because more extended photoperiod increased the efficiency of the photosynthesis in the former blue-green algae than the later. This increased photosynthetic activity positively affected the accumulation of extracellular products, which, when added to the medium to plant tissue culture, stimulated cell division, cell expansion, and organ differentiation in the vegetative and rooting stages. These positive effects in the vegetative and the root systems contributed to increasing the total chlorophyll content in the leaves and essential mineral elements such as nitrogen, phosphorous, and potassium.

The present study results agree with the previous works conducted on the micropropagation of other plants regarding the addition of CEP extracts of different algae species to the culture media, which in turn improved the vegetative and root characteristics [12, 14-16].

The treatment of half-strength MS medium supplemented with cyanobacteria extracellular products (CEP) extract of Oscillatoria tenuis grown at 16 h day-1 photoperiod recorded the best results in terms of response to direct organogenesis and rooting. The addition of CEP extracts to culture media of the date palm shoot regeneration was a supplementary component and not a substitute for the half strength MS medium. However, this additive substance can efficiently enhance culture properties reducing the cost of expensive MS salts.