Effect of different concentrations of BA on the shoot multiplication of tulip (Tulipa gesneriana L. cv. Arma) buds by in vitro culture

The current study was carried out to investigate the effect of different benzyl adenine concentrations in culture medium on the axillary buds response of ‘Arma’ tulip cultivar to shoot multiplication in addition to the number of lateral shoots per explant, the number of leaves per shoot, and the length of shoots. For this purpose, Murashige and Skoog medium was supplemented with 0.5 mg L-1 naphthalene acetic acid and various levels (0.5, 1, 1.5, 2, and 2.5 mg L-1) of benzyl adenine. The previously mentioned indices were monitored after eight weeks of culturing. The results showed that 1 mg L-1 benzyl adenine treatment resulted in a significant increase in the percentage of response to shoot multiplication which reached 83.33% after eight weeks of culture. However, apical buds did not respond to shoot multiplication under any of the tested concentrations. Additionally, the axillary buds growing on the MS medium with a concentration of 1.0 mg L-1 benzyl adenine recorded an increase in shoots number and length compared to other treatments with 5.33 shoots per explant and 5.67 cm, respectively. While 0.5 mg L-1 benzyl adenine recorded the lowest shoot multiplication response, shoots length, and number of leaves per shoot (61.0%, 2.33 cm, and 1.67 leaves per shoot, respectively).

Tulipa gesneriana L. is a beautiful flower that is cultivated as a cut flower, pot flower, and flower beds. The genus belongs to the family Amaryllidaceae [1].This plant is of great economic importance as it ranks third among the best-selling flowers in the world [2].

Tulip plants are traditionally propagated with bulbs. However, the proliferation of tulips using this method takes a long time since the production of bulbs is small (2-3 bulbs per plant) [3]. Tulip plant multiplication can also be carried out via in vitro culturing techniques with various studies dedicated to investigating the proper conditions of this method [4-7].

Growth regulators are among the key factors in tissue culture, and the effect of these substances on the success of tulip multiplication in vitro culture was the main subject of many previous studies. Previously, [8] reported that cultivating middle segment of tulip floral stalk on Murashige and Skoog (MS) medium which was supplemented with 1 mg L-1 1-Naphthaleneacetic acid (NAA), 1 mg L-1 6-Benzylaminopurine (BA), and 4.42 mg L-1 N6-(2-Isopentenyl)adenine (2iP) resulted in a better bud initiation compared to using the basal or apical segments of the floral stalk. Another in vitro study showed that adding 2 mg L-1 NAA and 1  mg L-1 of BA to MS medium induced the highest propagation ratio of apical and axillary buds in the three tulip cultivars ‘Appledoorn’, ’Page Polka’ and ‘Toronto’ [9]. Additionally, [10] found that the highest percentage of shoot multiplication was achieved using MS medium supplemented with 1.18 mg L-1 NAA, 0.11 mg L-1 TDZ, and 7.9 mg L-1 2iP at 5°C in ‘Blue Parrot’ tulip cultivar.

Taking into consideration that the ultimate aim of in vitro tulip propagation is to obtain a large number of plants that are genetically similar to the mother plant and free of viruses within a short period compared to the traditional propagation method, the current study aimed to investigate the effect of different BA levels in culture medium on the propagation of ‘Arma’ tulip in vitro cultures.

The study was conducted at the plant tissue culture laboratory (College of Agriculture, University of Basrah, Basrah, Iraq). Apical and axillary buds were collected from fully grown tulip bulbs of ‘Arma’ cultivar. After anatomy and removal of bulbs leafy scales (Fig. 1 A, B, and C), the buds were sterilized for 15 minutes. Sterilizing solution consisted of 0.1% Mercuric chloride solution supplemented with few drops of Tween 20. The sterile buds were then washed three times with sterile distilled water to remove the residue of the sterilization solution. These explants were cultured directly on MS medium [11] supplemented with a constant concentration of NAA (0.5 mg L-1) and different concentrations of BA (0.5, 1.0, 1.5, 2.0 and 2.5 mg L-1) (Fig. 1 D). Each treatment constituted of 10 replications. The culture was conducted inside a laminar airflow cabinet. The cultures were incubated at a temperature of 25±2 °C and a light density of 1000 lux. 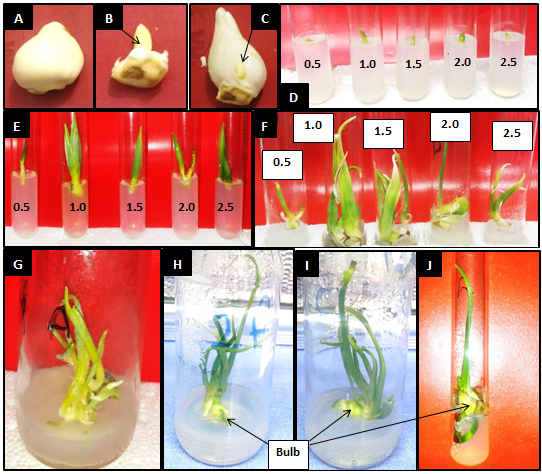 The measurements were recorded eight weeks after the culturing which included:

The experiment of the study was conducted in a complete randomized design. Data were analyzed statistically using analysis of variance. The revised least significant difference test was used to compare the means of treatments at a 5% probability level [12].

The results showed that the axillary buds' response to shoot multiplication ranged between 61% and 83.33% in 0.5 and 1 mg L-1 BA, respectively. It appears that 0.5 mg L-1 BA treatment was insufficient to stimulate the growth of axillary buds and thus, a minimum shoot formation response was attributed to this treatment; while on the other hand, a higher BA treatment (1 mg L-1) promoted shoot multiplication since BA is one of the most important cytokinins that stimulate the growth of lateral shoots and shoot formation [13]. However, this response gradually and significantly decreased with the increase in BA concentration above 1.0 mg L-1 and reached 70.33% at 2.5 mg. L-1 concentration (Fig. 2). This is a clear indicator that the initiation of the shoots is the result of an optimal combination of cytokinin (BA) and auxin (NAA) in the culture medium [14]. The results of the current study were in agreement with the results of other studies conducted on other varieties of a tulip plant [9][10] who reported that the high concentration of auxin with low concentrations of cytokinin stimulated the multiplication of lateral shoots. Apical buds did not respond to any of the studied combinations as no multiplication was observed. The reason for the lack of response to the formation of shoots maybe because the apical bud of the tulip plant was differentiated into a floral bud in the dormant phase until the date of flowering. 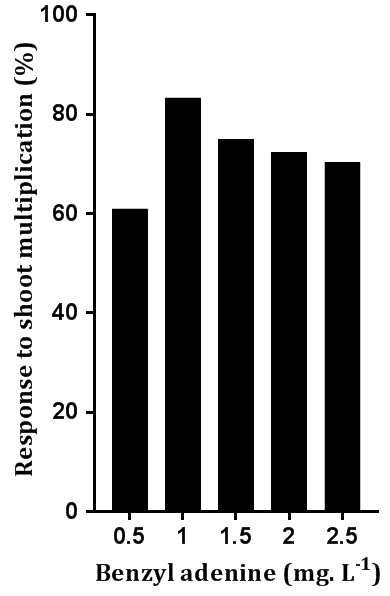 The results from (Table 1) show that there were significant differences between the different BA treatments in terms of shoots number and length, while there was no significant difference in the number of leaves per shoot. Similar to axillary buds' response, the medium with a concentration of 1.0 mg L-1 BA was significantly superior in comparison to other treatments in terms of shoots number. The number of shoots reached 5.33 shoots per explant under 1 mg L-1 BA treatment (Fig. 1 E, F, and G) and (Table 1). The concentration of 1.0 mg L-1 of benzyl adenine in the MS medium appeared to be supra-optimal for stimulating cell division and elongation in the axillary buds, which led to an increased formation of shoots and an increased shoot number per explant [15]. These results were similar to those of [16] who reported an increased shoot formation in pineapple plant under 1.0 mg L-1 of BA in the culture medium. No significant differences were observed between 0.5 and 1.5 mg L-1 BA treatments in terms of shoot numbers. Additionally, the 2.0 and 2.5 mg L-1 treatments recorded the lowest number of shoots with an average of 2.67 shoots in both treatments (Table 1). 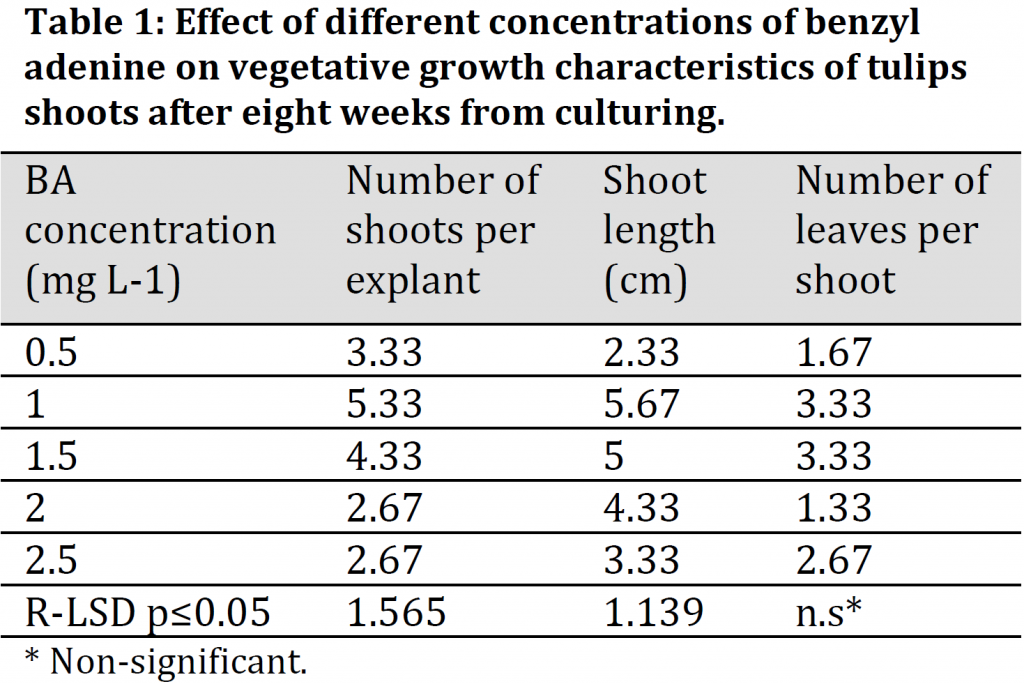 Table 1. Effect of different concentrations of benzyl adenine on vegetative growth characteristics of tulips shoots after eight weeks from culturing.

The mean shoot length ranged between 2.33 and 5.67 cm under 0.5 and 1 mg L-1 BA treatments, respectively. The average shoot length under 1 mg L-1 treatment was significantly higher than all other treatments except for 1.5 mg L-1 were no significant differences were observed (Fig. 1 E and F) and (Table 1). This increase in shoot length which was observed under 1.0, 1.5, and 2.0 mg L-1 benzyl adenine with 0.5 mg L-1 naphthalene acetic acid is attributed to the role of cytokinin in the division of cells and auxin in its elongation [15]. While on the other hand, the reduced length of the shoots cultured in the MS medium with the combinations (0.5 mg L-1 BA+ 0.5 mg L-1 NAA) or (2.5 mg L-1 BA + 0.5 mg L-1 NAA) can be the result of a non-optimal division and elongation stimulation compared to other combinations [15].

No significant changes in leaves number per shoot were observed between the treatments. However, the highest leaves numbers per shoot were recorded under 1.0 and 1.5 mg L-1 BA treatments with averages of 3.33 leaves per shoot while the lowest was recorded under 2 mg L-1 with 1.33 leaves per shoot (Table 1). (Fig. 1 H, I and J) shows swelling of shoot bases, initiation, and formation of bulbs eight weeks after culturing in MS medium supplemented with 1.0 mg L-1 benzyl adenine and 0.5 mg L-1 naphthalene acetic acid. The reason for this swelling is the accumulation of carbohydrates and nutrients to develop reproductive parts called bulbs [10].

Tulip axillary buds are the most responsive to shoot multiplication and bulb formation. The current study showed that culturing axillary buds of ‘Arma’ tulip on MS medium supplemented with benzyl adenine (BA) at a concentration of 1.0 mg L-1 and naphthalene acetic acid (NAA) at 0.5 mg L-1 resulted in the highest shoot multiplication response. Additionally, this combination increased shoots length and numbers in comparison to the other investigated BA and NAA combinations.