This work was conducted as a pot experiment, to evaluate the effect of adding K, Fe,  Zn, and Mn with conventional fertilizers on K/Na, Ca/Na and Mg/Na ratios and Catalase enzyme activity in leaves and on growth and yield of wheat (Triticum aestivum L.) under salinity conditions. K was added solely with conventional fertilizer dose (F1). In the second treatment, K, Fe, Zn, and Mn were sprayed on the plant as a foliar application before heading stage (F2). In the third treatment, K, Fe, Zn, and Mn were applied to the soil with conventional fertilizer dose (F3). Control treatment (F0), at which only conventional fertilizer dose was applied, for comparison. The field was irrigated with saline groundwater of 4.30 dS m-1. Results showed that leaves K/Na, Ca/Na, and Mg/Na ratios as well as dry matter (F2) and (F3) treatments. Grain yield was increased by 29.60%, 31.52%, and 27.46% under F1, F2, and F3 treatments compared to that of control, respectively. Catalase activity under (F1) treatment was three times over that of control. The results suggested the importance of K and micronutrient fertilization when wheat is grown in salt-affected soil or irrigated with moderately saline water.

The salinity of soil and irrigation water is one of the major stresses that limit plant growth and productivity in arid and semi-arid regions. Salinity usually induces nutritional disorders in plants which consequently affects plant biomass in addition to yield quantity and quality. It has been reported that these disorders may be the result of salinity direct effects on nutrient availability, competitive uptake, transport, or partitioning within the plant [1-4].Salinity also affects plant growth since the high salt concentration in the soil solution interferes with the balanced absorption of the essential nutritional ions [5]. Furthermore, salinity causes imbalanced K+, Na+, Ca+2, and Cl- uptake in plants that alter the plant metabolism by affecting osmotic potential, enzymatic activities, membrane permeability, and electrochemical potential [6][7]. Therefore, improving the nutritional status of plants under salt stress conditions is of great importance for maintaining crop productivity.

Many studies reported that enhancement of plants nutrition status with mineral nutrients such as N, K, Ca, Mg, Fe, Zn, Mn, and Cu leads to increase crops tolerance to salinity due to the common physiological functions of these elements in plant cells such as the maintenance of photosynthesis activities and utilization of light energy in CO2 fixation [4][8-16]

The salient effects of salinity in the plant are the impairment of the electron transport chain in the cell at high saline concentrations leading to the generation of reactive oxygen species (ROS). They are also called free radicals such as O2-, H2O2, and OH-. These powerful oxidizing agents quickly attack biological molecules such as DNA, lipids, and proteins, leading to severe disruption of cellular metabolic processes and damage to cell membranes [3][4]. To prevent such degradation or damage, plant cells are equipped with anti-oxidant defense systems consisted of antioxidants such as non-enzymatic (carotenoids, glutathione, ascorbate & tocopherol) and antioxidant enzymes such as catalase (CAT), peroxidase (POD), and superoxide dismutase (SOD) which protects plant cells from oxidizing actions [17][18].

Catalase [H2O2:H2O2 oxidoreductase, EC (1.11.1.6)] is a tetrameric enzyme that follows the ping-pong mechanism to remove the harmful effects of H2O2 by removing the toxin complexes in the peroxide reactions and removing the electrons that form O2-. Usually, it is formed when the plant is subjected to bio-stress. In such circumstances, oxidative stress occurs due to the production and assembly of ROS such as O2 hydrogen peroxide H2O2 superoxide O2- hydroxide radical OH- singlet oxygen O-1 [19][20].

Several studies have indicated the critical role of potassium ions and micronutrients Fe, Zn, and Mn in reducing the oxidative stress of the plant by stimulating or controlling the activity of antioxidant enzymes to reduce ROS production and also maintaining the electronic transmission chain in the process of photosynthesis [2][4][20-22]. Thus, improving the nutrient status of potassium and micro-elements in plants exposed to salt stress is essential to reduce oxidative stress that causes cell damage, at least by reducing ROS formation during photosynthesis [4]. Therefore, the objective of this work was to evaluate the effect of potassium and micronutrients in increasing yield and stimulating the activity of catalase enzyme (CAT) in wheat leaves grown under salt stress conditions.

A Pot experiment was carried out in the greenhouse of Soils & Water Resources Center, Directorate of Agricultural Research, Ministry of Science and Technology, Al-Zafaraniya, Baghdad, Iraq, to study the effect of potassium, iron, zinc and manganese fertilizers in the distribution ratios of potassium, calcium, magnesium to sodium and Catalase (CAT) activity in wheat (Triticum aestivum L.) (Tamose-2 variety) leaves when exposed to salt stress. Salt-affected soil with clay texture was collected from Al-Tuwaitha Research Station, 30 km southeast of Baghdad, classified as Typical Torrifluvent. Soil samples (0-30 cm) depth was air-dried, ground, and passed through a 2mm sieve mesh, thoroughly mixed and packed in plastic 6kg pots. The physicochemical properties of the soil before planting are presented in (Table 1). Minerals analysis was carried out according to the standard methods described by [23][24] using flame photometer, Spectrophotometer, and Atomic Absorption Spectrophotometer instruments. 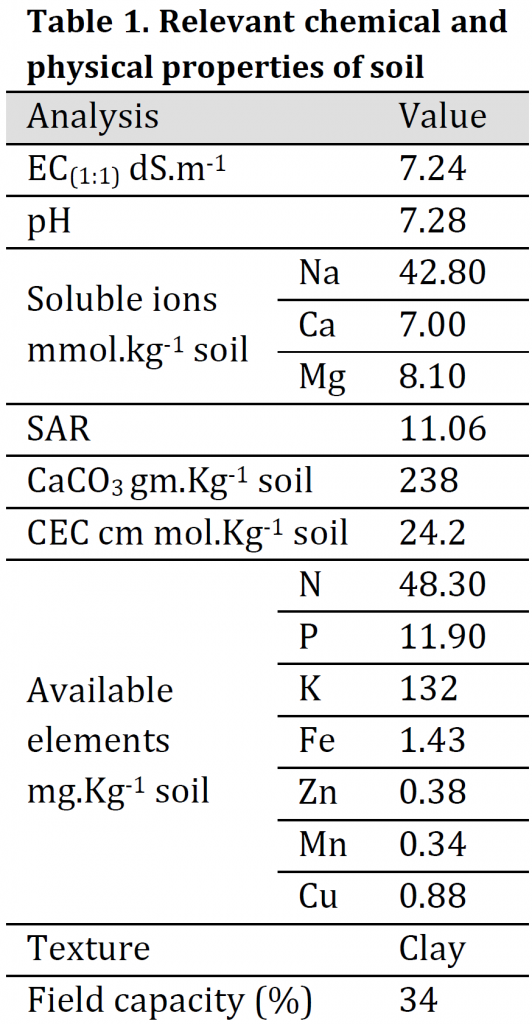 Ten seeds of ‘Tamose2’ wheat variety were sown in each pot. Seedlings were thinned out to six per pot 15 days after germination.

The recommended fertilizers of nitrogen and phosphorus were added to control (F0) and all other treatments in the forms of urea for N and triple superphosphate for P at the rates 100 and 30 mg kg -1 soil, respectively. The fertilizers of potassium, iron, zinc, and manganese were added in the form K2SO4, FeSO4.H2O, ZnSO4.7H2O, and MnSO4.H2O, respectively. The study included the following treatments:

All phosphorus was added at sowing, while nitrogen was split into two equal doses at tillering and booting stages. Potassium, Iron, zinc, and manganese soil and foliar application were added at the booting stage. The treatments were arranged in a completely randomized design (R.C.B.D.) in three replicates. All treatments were irrigated with brackish well water (Table 2) until harvest. The plants were harvested at maturity stage. Total dry matter and grains yield per pot were recorded.

Random plant samples consisting of five flag leaves (blade & sheath) were collected from the main stem of a plant from each pot in the flowering stage, washed with normal water, and then distilled water to remove dust [25]. The leaves were cut into small pieces and dried at 65 °C for 48 hours and ground with an electric mill. 0.2 g of crushed dry leaves was digested with sulfuric and perchloric acids [26] and analyzed chemically for K, Na, Ca, and Mg elements according to the standard methods as in [24] using Atomic Absorption Spectrophotometer (400 P Analytica Jena, Germany).

Samples of wheat leaves (5.0 g each) were collected at flowering stage. Leaf samples were homogenized in a potassium phosphate buffer solution (0.1M), pH=7.8 (1:2 w/v) using a pre-chilled mortar. The extract homogenate was transferred to centrifuge tubes and centrifuged at 12000g for 30 minutes and the supernatant was transferred to a new tube. The enzyme activity of the catalase (CAT: EC 1.11.1.6) was assayed using the method of [27]. 0.2 mL of the supernatant was incubated in 1 mL of substrate (65 µmoL per mL H2O2 in 60 mmol/L sodium-potassium phosphate buffer, pH 7.4) at 37 °C for 1 min. The enzyme activity was suspended by adding 1 mL of 32.4 mM ammonium molybdate. The yellow absorption value of the molybdate complex and hydrogen peroxide was measured at 405 nm using a spectrophotometer (Specord205 Analytica Jena Germany). Catalase enzyme activity was calculated according to the following equation:

The effect of fertilization with potassium and microelements on K/Na, Ca/Na and Mg/Na ratio in leaves of wheat during the flowering stage is given in (Table3). Results showed that the concentration ratios in the wheat leaves were significantly affected by the application of K, Fe, Zn, and Mn. This application induced an increase in K/Na, Ca/Na, and Mg/Na ratios in leaves. The increase was more pronounced in K/Na ratio which was 2.44, 2.73, 3.04, and 3.60 under F0, F1, F2, and F3 treatment, respectively. The highest K/Na ratios were obtained under (F2) and (F3) treatments. This increase in K/Na ratio may be attributed to trace elements' role in increasing the capability of the root system for selectivity uptake of K+ ion and the limitation of Na ion uptake in the leaves [28][29]. This indicates that the addition of potassium and trace elements with regular fertilizer dose can increase salt tolerance of wheat by reducing Na uptake. [1][30] reported that the plant which is capable of maintaining a high ratio of K/Na has high salinity tolerance.

Table 3. Effect of fertilization with potassium and micronutrients on elements ratios in wheat leaves

These results are consistent with previous results that ground or foliar fertilization with major and minor nutrients has resulted in improved absorption of potassium, calcium, and magnesium elements [10-16][21] resulting in an increase in plants tolerance to saline stress conditions as confirmed by [31].

Effect of the selected fertilization treatments on dry matter and grain yield (g pot-1) of wheat is given in (Table 4). Results indicated that there was a significant effect of potassium and trace elements application on the total dry matter. The highest dry matter was recorded under F2 treatment (34.2 g pot-1). On the other hand, the lowest dry matter value was (29.40 g pot-1) was obtained under treatment F0 treatment. The recorded increases in the dry matter over that of control (F0) were 12.22, 16.20, and 13.24% under F1, F2, and F3 fertilization treatments, respectively.

Table 4. Effect of fertilization with potassium and micronutrients on the dry matter and grains yield (g pot-1) of wheat

The grain yield (Table 4) was significantly increased under F1, F2, and F3 treatments in comparison to control, and the highest grain yield was 6.80 g pot-1 under F2 treatment (foliar application). The increase in the yield over that of control was 29.60, 31.52, and 27.46% under F1, F2, and F3 treatments, respectively. That indicates the importance of foliar application of K and trace elements in alleviating the adverse effect of salt stress on growth and grain production of wheat which is in correspondence with previous studies [4][10][11][14][16][21][32].

Higher CAT activity was observed under the soil application of K (F1) compared to other treatments (181.98 KU.l-1) which was three folds higher than that of the control treatment (F0). On the other hand, enzyme activity under conventional fertilizer dose was 58.03 KU.l-1, which is significantly lower than other treatments (Table 5). The differences between F2 (foliar application) and F3 can be explained by the fact that concentration of  Mn, Zn, Fe, Ca, and K nutrients in wheat plants at F3 treatment were not enough to increase the enzyme's activity to counteract salt stress. This may be attributed to the precipitate part of the added micronutrients due to higher pH and carbonate content in the used clay soil [33]. The increments in CAT activity helped plant in scavenging H2O2 which is generated in normal or abnormal conditions. Additionally, CAT activity maintained the ascorbate pool and activated the defense system of plant cells which in turn led to an increase in wheat plant tolerance and maintained the best growth under saline conditions [2][34]. These results confirm that this enzyme is more effective in wheat when K, Fe, Zn, and Mn were added either to the soil or foliar application. This is due to the fact that K and micronutrients are necessary for the synthesis of proteins and the effectiveness of enzymes as it is a carrier element and acts to change the shape and configuration of the active site in the enzyme molecule to obtain better binding between the substrate and the enzyme [35-37].