Apple (Malus domestica) is among the most popular, widely consumed, and cultivated fruit trees worldwide [1][2]. Apple fruits are usually consumed fresh or used in various food items such as desserts, jams, and drinks because of their delicious taste; in addition to the remarkable attributed health benefits [3]. Many apple cultivars are known for their ability to be stored for long periods. Due to the recent cold storage techniques, fruit markets are being supplied by apples all year round. However, fruit quality declines during cold storage and reaches minimum levels by the end of the storage period; especially those compounds of high nutritional values such as antioxidants and vitamins [4][5]. Taking into consideration the popular orientation toward healthier diets and wholesome foods [6], it is highly important to investigate the factors affecting fruit quality after harvest.

In apple nutritional programs, Nitrogen levels and source type could have substantial effects on postharvest fruit quality [7]. The unbalanced nutrition or inadequate nitrogen levels could inhibit cell division and decrease vegetative growth, which reduces the ability of plants to produce adequate yield and fruit of high quality. Therefore, choosing the proper rate of N fertilizer is crucial in apple production cycles [8][9].

Vitamin C (VC) is one of the highly important vitamins in the human diet because of its therapeutic and antioxidant properties[10] as it fortifies the body defense system against free radicals and reactive oxygen species, thereby preventing tissue damage [11][12]. Apples are considered a good source of VC as they contain considerable amounts of this vitamin [13]. Additionally, apples have elevated phenolic compounds content [14][15], which contribute significantly to the sensory characteristics such as color, astringent, and taste of apple cider and juice. Moreover, phenolic compounds have previously demonstrated vigorous antioxidant properties in several systems which refers to its cytoprotective properties [16][17]. Furthermore, apples have one of the highest levels of antioxidant activity among fruit and vegetables [18].

N fertilization has been reported to affect phenolic content in several fruits and vegetables such as Chinese cabbage [19]broccoli [20], and apple [21]. In the mentioned plants, an increase in phenolic content has been observed by reducing Nitrogen application rates. Vitamin C content and antioxidative activities in Chinese cabbage were significantly decreased with the increase in nitrogen application rates [22]. In another study, VC content was decreased by increasing the nitrogen rate in Yellow Grape Tomato nutritional program [23].

This study aimed to investigate the effect of different levels of ammonium in the nutrition solution on vitamin C, total phenolic compounds and total antioxidant capacity after harvest and during the cold storage period of three apple cultivars: ‘Granny Smith’ for its known storability, ‘Gala’, and ‘Golab Kohans’ for being widely cultivated in Iran as a short season fruit with good marketability but low storability potentials.

The study was carried out in 2017 and 2018 seasons in the field of the Horticultural Sciences Department, University of Tehran. The daily mean temperatures are 3˚C (average low of -1˚C and an average high of 8˚C) in winter and 25˚C (average low of 10˚C and an average high of 34˚C) in summer. The average humidity is 65% and 35% in winter and summer, respectively. Six years old apple trees of the cultivars ‘Golab Kohans’, ‘Gala’, and ‘Granny Smith’  grafted on M9 rootstock and growing in 20-liter pots under open field conditions were used in this study. Five nutrition solutions (S1, S2, S3, S4, and S5) of different ammonium to total nitrogen [NH4+/(NH4++NO3-)] were used. The ratios of ammonium nitrogen to total nitrogen were 0, 0.08, 0.16, 0.19, and 0.27 meq/L, respectively. Trees were irrigated three times in spring with irrigation solution, while in summer; they were irrigated once a week. Fruits were harvested at commercial maturity on June 29th, July 21st, and September 18th for GK, G, and GS, respectively, and transferred to cold storage at 0 ± 1 ˚C with 90–95% relative humidity. Further information regarding agricultural practices, nutrition solutions… etc. were described in [7]

Vitamin C (VC), total phenolic compounds (TPC) and total antioxidant capacity (TAC) were measured throughout cold storage period at 0, 15, 30, and 45 days for GK; 0, 30, 60, and 90 days for G; and at 0, 40, 80, 120 and 160 days for ‘Granny Smith’ with three replications(three fruits per replication) for each evaluation date. Evaluation periods were chosen due to the different storability potentials of the three cultivars i.e. ‘Golab Kohans’ having the least storage ability and ‘Granny Smith’ having the longest storing potential.

Measurement of phenol content in fruits was carried out using the method of [25]. The fresh fruit sample of 0.5 g was completely crushed in 4 ml of 80% ethanol until homogenization. The homogenate was then centrifuged for 20 minutes at 9500 rounds per minute (rpm) and the clear supernatant solution was collected. In a clear tube, 8 ml double distilled water, 1 ml Sodium carbonate 7%, and 0.5 ml Folin solution was added to 0.5 ml of the clear supernatant fruit solution. After that, test tubes were put in a dark place for 90 minutes. Then, absorption at 625 nm was recorded using a spectrophotometer. The total phenols content was then calculated as gallic acid equivalents (GAE) in a Kg of fresh fruit tissue using a standard of gallic acid for absorption.

Total antioxidant capacity was measured in the transparent extract obtained in TPC measurement. 3.4 ml of 2,2-diphenyl-1-picrylhydrazyl (DPPH) 0.1 mM were added to 1 ml of the clear methanol extract. The mixture was kept at room temperature and in the dark for one hour. TAC was measured based on the absorbance at a wavelength of 517 nm using a UV-Vis spectrophotometer in comparison to the standard curve. The results obtained were calculated and expressed as the percentage of neutralized DPPH radicals (%) [26].

The study was carried out in a completely randomized block design with five treatments and 3 replications. The experiment was repeated twice for 2017 and 2018 seasons. No significant differences were found between the studied seasons (data not shown); therefore, the average values of two seasons were used for further analysis. Data were analyzed using Duncan’s multiple range test (DMRT) using GenStat statistical software 17th ed. at 5% probability level. Additionally, response surface analysis was performed between different ammonium levels and monitoring times to investigate the interaction effect between the two variants in terms of VC, TPC, and TAC.

Figure 1. Effect of Cultivar on Vitamin C (mg/100g) (A), total phenols (mg/kg) (B), and total antioxidant (%) (C) in the fruits of ‘Golab Kohans’, ‘Gala’, and ‘Granny Smith’ apple cultivars at harvest. Total Phenolic compounds contents were expressed as gallic acid equivalents (GAE) in a Kg of fresh fruit tissue. Total antioxidant capacity was expressed as the percentage of neutralized DPPH radicals. * Values were represented as an average for all treatments at harvest (regardless of ammonium input).

A significant decrease in VC was observed in ‘Golab Kohans’ cultivar by increasing nitrogen of ammonium source. The maximum value of VC was found in S1 (control) with 13.37 mg/100g, while the minimum value was found in S5 which recorded 9mg/100g (Table 1). On the other hand, the only noticed a significant difference in ‘Gala’ was between S3 and S4 treatments with S4 being the highest in VC content. In GS, no significant differences were found among all treatments. In ‘Gala’, the highest vitamin C content was observed in S4 (16.04 mg/100g), while the lowest was recorded in S3 with a value of 14.72 mg/100g (Table 1). In ‘Granny Smith’ cultivar, the maximum value of VC was found in apples from trees fertilized with S3 (14.19 mgl100g), while minimum value was observed in S2 which recorded 13.75 mg/100g (Table 1). Various researches previously reported the effect of increased nitrogen application on VC content; however, the results of those researches were contradictory as some reported a significant increase in VC content by increasing nitrogen application, while others reported no significant differences or even decreases in VC content [28]. VC synthesis was reported to decrease under the excessive nitrogen application as a result of increased protein synthesis and decreased carbohydrate production which is crucial in vitamin C synthesis [6]. The results of the current study introduce evidence of different VC synthesis response in different apple cultivars under increased nitrogen of ammonium source application. 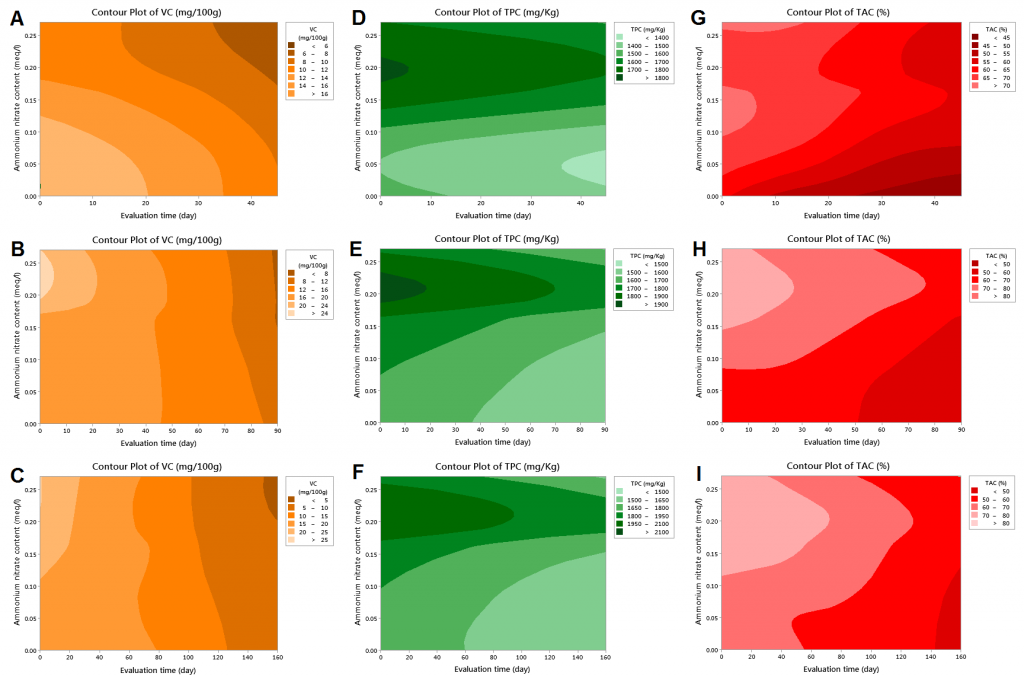 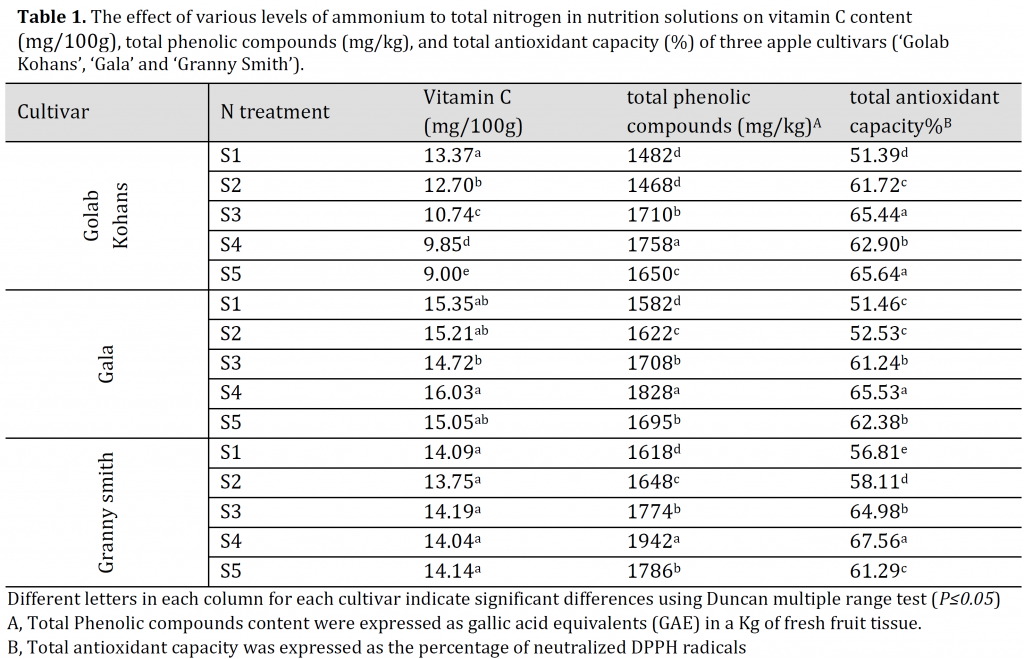 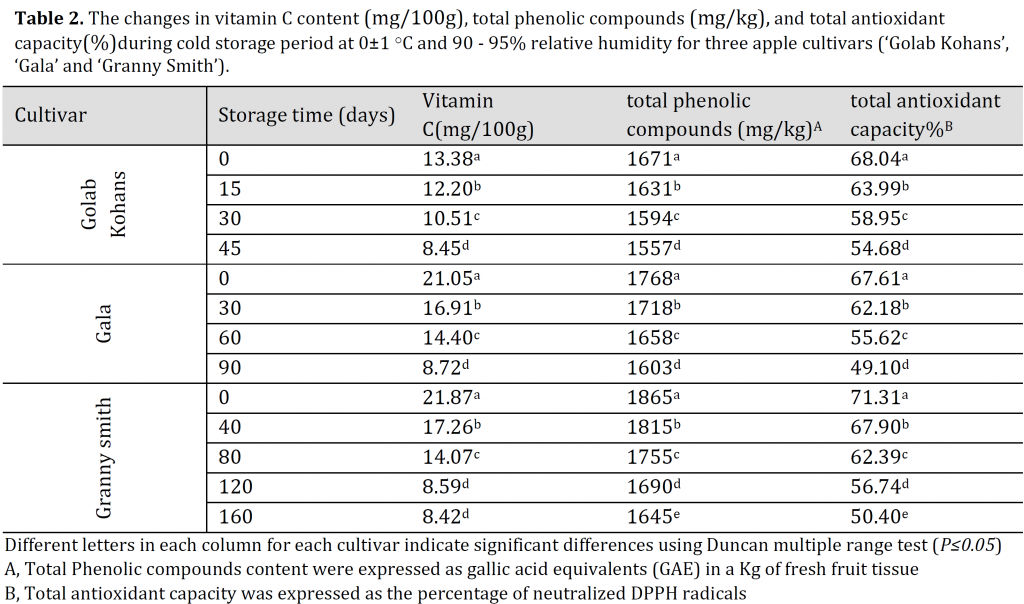 All cultivars showed a significant decrease in VC during the cold storage (Table 2), which corresponds with [29] who reported more than 50% drop in VC content of apple fruit after 6months of cold storage. Surface response analysis demonstrated that a more pronounced decrease in VC can be seen under high ammonium input in ‘Golab Kohans’ (Fig. 2 A) compared to the other cultivars that exhibited less relation between ammonium input level and VC throughout cold storage (Fig. 2 B and C). The decrease in VC content in storage is related to its nature of being susceptible to direct or enzymatic oxidation in comparison to other compounds during cold storage [30][31]. It appears that high ammonium input might contribute positively to VC degradation by participating in enzyme synthesis and/or enzymatic oxidation.

The highest values of TPC were found in S4 treatment in all cultivars with 1758, 1828, and 1942 mg/kg for GK, G, and ‘Granny Smith’, respectively; while the minimum values were observed in S2 for ‘Golab Kohans’ (1468 mg/kg) and in S1 (control) for ‘Gala’ and ‘Granny Smith’ (1582 and 1618 mg/kg, respectively) (Table 1). It was reported that 25:75% NO3–:NH4+ treatment resulted in the highest levels of both conjugated and bound polyamines [32], which might explain the results of the current study as polyamines are key players in secondary metabolites synthesis including phenolic compounds [33]. All cultivars exhibited a significant decrease in TPC during the cold storage period (Table 2). This reduction in TPC during cold storage appears to be genotype-dependent, as it was reported that some genotypes undergo this degradation through cold storage [34][35][36]which can be interpreted as the result of phenolic compounds instability during cold storage resulting in a total metabolic degradation [35]. The surface response model illustrated that high ammonium input in all cultivars was associated with higher TPC and better preserving of the original phenolic compounds content throughout storage period compared to control (Fig. 2 D, E, and F).  This effect might be attributed to ammonium water stress alleviation potentials [37] which in turn, might result in a decreased polyphenol oxidase (PPO) activity [38] and thus, fewer phenols degradation during the storage period. The studied trees might have undergone a water stress status as spring was windy and the temperature reached high values in summer at the experiment site. This might have induced water stress even with proper irrigation program. However, this needs further investigation.

In regards to ammonium application, S4 gave the highest TAC for both ‘Gala’ and ‘Granny Smith’ cultivars, while S3 and S5 gave the highest TAC in ‘Golab Kohans’ cultivar. On the other hand, the lowest TAC values were observed under S1 treatment for all cultivars (Table 1). Similar to TPC, TAC response surface contour plotting illustrated that nutrition solutions with higher ammonium levels resulted in a better maintaining of antioxidant capacity throughout cold storage period compared to non-ammonium nutrition solution (control) and in all cultivars (Fig. 2 G, H, and I). However, ‘Golab Kohans’ showed a more sharp decrease under control treatment (Fig. 2 G). The significant increase in TAC under all ammonium treatments and for all cultivars in comparison to non-ammonium control treatment (S1) might be attributed to the accumulation of polyamines due to the high ammonium concentrations [36][39]resulting in the activation of various plant defense mechanisms [40] including antioxidants [33].

The results of this study showed that the cultivars exhibited different responses toward ammonium nitrogen application in terms of VC content. ‘Golab Kohans’ recorded an increased VC content by increasing ammonium in the nutrition solution. On the other hand, minor or no changes were observed in ‘Gala’ and ‘Grany Smith’. TPC and TACin all cultivars were significantly increased under any ammonium input in comparison to control treatment. Furthermore, all cultivars underwent a significant decrease in VC, TPC, and TAC throughout cold storage. Surface response analysis results illustrated that with the increase in ammonium inputs, more vitamin C degradation was observed. On the other hand, less TPC degradation and TAC decreasing were recorded under similar conditions.