Plant nutrition is one of the determinate factors in fruit production cycles. Foliar fertilizer application is considered a complimentary nutrition method which proofed to be highly efficient under certain conditions. In this research, a foliar application of balanced foliar fertilizer N.P.K (20:20:20) +TE with different concentrations (0, 5, 10, and 15 g/l) was conducted on Coscia pear seedlings. Plant vegetative growth traits in addition to certain biochemical characteristics (Roots and leaves dry weight percentages, chlorophyll content, carbohydrates content, and minerals content) were measured. The results showed that plant height, stem diameter, branches length, leaf area, main roots number, root length, root dry weight, leaves dry weight, chlorophyll, and minerals content were significantly increased by increasing foliar spray concentration from 5 to15 g/l which confirms the importance of foliar spray as an enhancer of plant physiological operations. However, the highest carbohydrate content and carbohydrate/nitrogen (C/N) ratio were observed under A10 (10 g/l) treatment which might refer to the importance of this level of foliar fertilization, specifically in this phase, to accelerate the transition from juvenility to production phase.

Pear (Pyrus communis L.) belongs to the family Rosaceae and was originated in the areas surrounding the Caspian Sea and the northern foothills of the Himalayas, from which it spread to southern Europe [1].

Plant nutrition is one of the most important factors affecting the growth and productivity of fruit trees in general. In order for the plant to grow, develop and complete its life cycle ideally, there is a need for a permanent supply of nutrients that are the driving forces of all the vital activities carried out by the plant. Therefore, nutrient deficiencies adversely affect the growth and development of the plant [2-4].

Nitrogen, phosphorus, and potassium are among the most important nutrients. Nitrogen plays the vital role in the synthesis of amino acids, nucleic acids, chlorophyll, and many plant hormones [5-9]. The importance of phosphorus lies in the formation of many organic compounds necessary such as energy-rich compounds such, and plays a key role in photosynthesis, respiration, in addition to carbohydrate and fatty acids synthesis [10][11].

Some of the nutrients present in or added to the soil are exposed to sedimentation, washing, or volatilization, especially in soils with a basic reaction or a high content of lime [12]. Therefore, the addition of fertilizers of macro and microelements to soils in central and southern Iraq, which is characterized by its high content of lime with a basic reaction as well as its hot and dry climate in summer, is often accompanied by a large loss of these nutrients.

Since the leaf is the center of photosynthesis and other vital processes, the lack of nutrients promptly appears on the leaves; therefore, the fastest way to address this deficiency is by adding nutrients directly through foliar fertilizing [13][14] which is carried out by spraying the vegetative system with completely soluble forms of nutrients and can meet up to 85% of plant’s nutrients requirements [15]. Previously,  Bentchikou [16] and Kessel [17] indicated that the primary goal of foliar fertilization is to facilitate absorption and utilization of the used nutrients and to remove the visible deficiency symptoms on the leaves due to the lack in one or more of the nutrients in addition to improving the growth and yield [18][19]. This method is considered economically efficient as it reduces the need for large quantities of nutrients, especially macro elements, in comparison to other methods [20], ensures the rapid positive response of the vegetative parts, and enables the mixing of fertilizers with pesticides and growth regulators which reduces energy and time consumption. Therefore, this study aimed to investigate the effects of different levels of foliar fertilization on the early vegetative characteristics in Coscia pear seedlings

The experiment was carried out at 2015 season in the Plant Breeding and Improvement Research Center, Directorate of Agricultural Research, Ministry of Science and Technology,Al-Tuwaitha station, Baghdad, Iraq, to study the response of Coscia pear seedlings to the foliar fertilization. The seedlings were grafted on Pyrus calleryana rootstocks at the age of one year and planted in 10 kg black plastic bags, filled with soil and peat (1:1).

A balanced foliar fertilizer (20-20-20) nutrient solution (Scotts–Bulgaria) with the contents shown in (Table 1) was used in this experiment. Foliar spraying was carried out every 21 days from the first week of April 2015 to the beginning of October 2015. Each application was carried out in the early morning one day after irrigation as the stomata are open and the leaf soluble contents concentrations are low which promotes the process of absorption. The solution was sprayed onto the vegetative system using a 10-liter manual sprinkler until full wetness with the addition of Tween-20 to reduce the surface tension of the water molecules. Three levels of foliar spray concentrations were used 5 g/l (A5), 10 g/l (A10), and 15 g/l (A15) in addition to a control treatment (A0).

The leaves chlorophyll content was measured using 502-SPAD Chlorophyll meter (Minolta-Japan) by taking the reads of 10 leaves per experimental unit and then calculating the average according to [22].

For other biochemical assays, samples of 5 leaves from each experimental unit were dried in an electric oven at a temperature of 65 ○C for 72 hours until the weight became constant and then dried leaves were powdered.

Carbohydrates content in the leaves was measured according to [22] by adding 12 ml of (1N) perchloric acid to 0.2 g of dry leaves powder. The samples were then incubated in a water bath at 60 ○C for 60 minutes. After that, the samples were centrifuged for 15 minutes at 3000 rpm, and then, the clear supernatant was collected in a volumetric flask. The previous steps were repeated thrice for each sample, and then the flask volume was made up to 100 ml by adding distilled water. 1 ml of the previous extract was taken and 1 ml of 5% phenol alcohol with 5 ml of concentrated sulfuric acid was added. The light absorption of the formed solutions was then measured at 490 nm wavelength with UV/VIS spectrometer. Carbohydrates content was calculated based on the standard absorbance equation and the original sample weight.

The experiment was carried out in a Randomized Complete Block Design (RCBD). Each measurement was replicated three times. The averages were compared using Fisher's least significant difference (LSD) at a probability level of P<0.05.

The results indicated that A15 treatment (15 g/l) induced the most significant increase in plant height, stem diameter, branches length, and leaf area with values of 56.75 cm, 0.27 cm, 0.4 mm, 39.33 cm, and 7095 cm2 for each trait respectively; while the lowest values were attributed to A0 with 46.58 cm, 0.17 cm, 0.32 mm, 29.67 cm, 5363 cm2 for the previously mentioned traits respectively (Table 2). Overall, a significant increase in all vegetative traits was observed by each increase in foliar spray concentration; however, leaf area and stem did not undergo an increase between A5 and A10 treatments (Table 2). The observed increase in the evaluated traits is attributed to the role of nutrient solution in satisfying part of the plant’s need for mineral nutrients necessary for photosynthesis, respiration, and various metabolic processes; especially nitrogen role in stimulating auxin synthesis, which encourages cell division and elongation. These results are consistent with [3][5][22]. 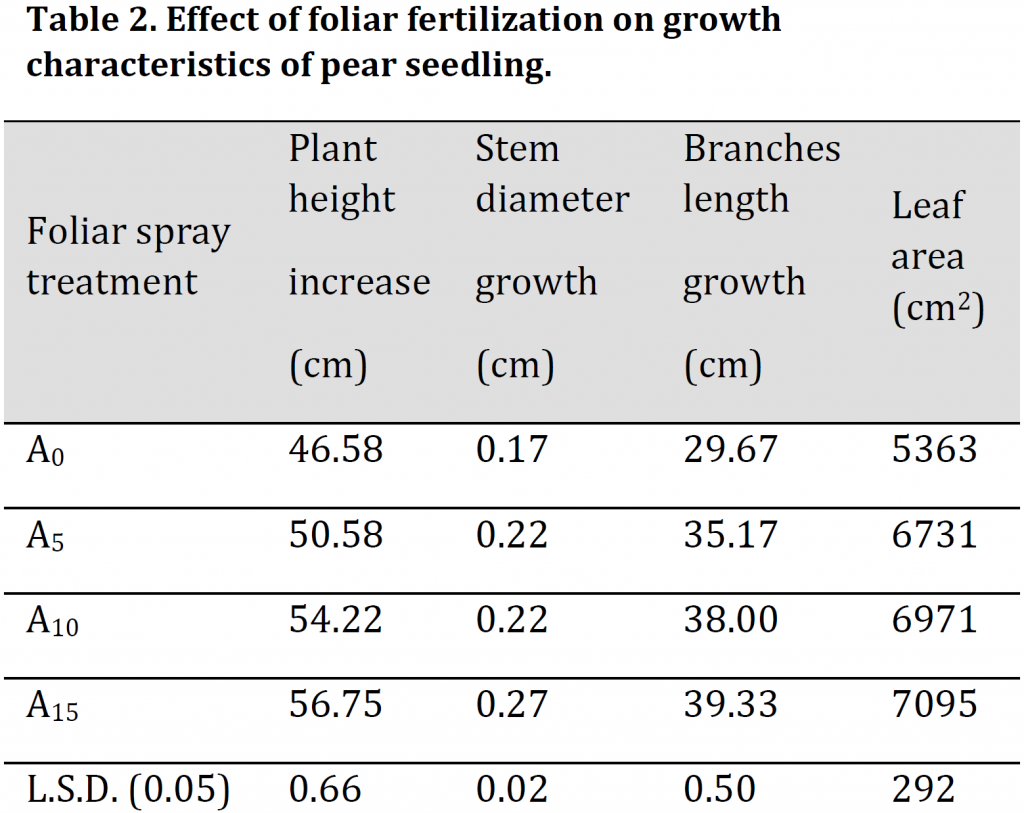 It was noticed that foliar fertilizer spray had significantly increased main roots number, length, and dry weight percentage. The highest values of the previously mentioned characteristics were observed in A15 with 12, 35.33 cm, and 26.73 % respectively while the lowest values were recorded under A0 treatment with 7, 20 cm, and 17.13 % respectively (Table 3). These results of significant increase in the number, length, and dry weight of the roots under foliar fertilizer application are consistent with [2]. 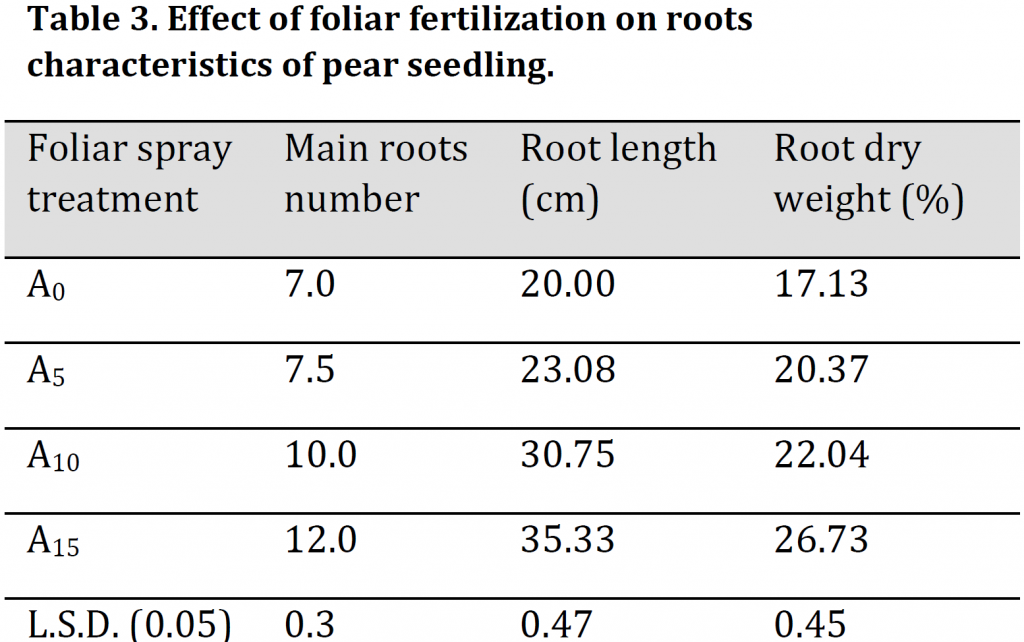 Leaves’ dry weight and chlorophyll contents were significantly increased by increasing foliar application with A15 treated seedlings having the highest values of 0.21g and 41.43 µmol/m2 respectively and A0 treated seedlings with the lowest values 0.13 g and 37.17 µmol/m2 (Table 4). Similarly, carbohydrate content in leaves was also significantly increased under foliar spray treatment. Although A15 treated seedlings had significantly higher carbohydrate content in comparison to both A0 and A5 treatments, the highest carbohydrate content was found in A10 treatment (Table 4). The reason may be due to the formation of some enzymatic accompaniments that contribute to stimulating growth (NADPH, NADP, FAD). Additionally, potassium by controlling the opening and closing of stomata increases the efficiency of the leaf in photosynthesis and carbohydrate production. These results are similar to those obtained by [23][24] 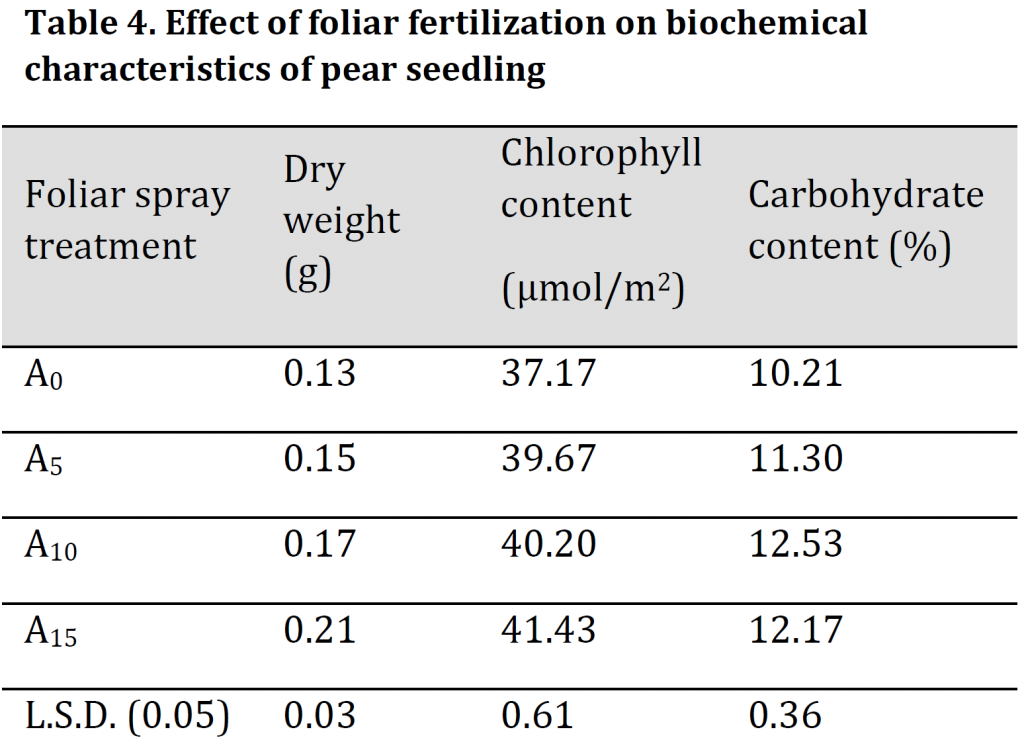 Mineral content analysis results illustrated that the increase in foliar fertilizer concentration resulted in significant increases in leaves minerals contents (Table 5). The highest nitrogen, phosphorus, potassium, calcium, magnesium, iron and zinc were observed in A15 treatment with values of 1.2 %, 0.22 %, 1.45 %, 174 mg.kg-1, 21 mg.kg-1, 62.67 mg.kg-1, and 17.67 mg.kg-1 respectively; while the lowest values were recorded in A0 treatment with 1.05 %, 0.15 %, 1.31 %, 150 mg.kg-1, 16.33 mg.kg-1, 50.67 mg.kg-1, and 16 mg.kg-1 respectively. A significant increase in the carbohydrate/nitrogen (C/N) ratio was observed by increasing the dose of foliar spray. However, due to the significantly higher carbohydrate and lower nitrogen contents in A10 treatment in comparison to A15 treatment; C/N ratio was significantly higher in the former treatment in comparison to the later (Table 5) which might refer to the importance of this treatment level in accelerating transition period from juvenility to production phase [25]. Foliar fertilizer was previously reported to increase the plant's nutrient content as the macro and micronutrients that are absorbed directly through the leaves stimulate the root system leading to an absorption increase and an assimilation enhancement, which positively influences the absorption of potassium and phosphorous, and this explains the increase in mineral content in the leaves [24]. Additionally, the enhancements in the nutritional condition seem to have had a significant positive effect on photosynthesis that reflected as an increase in carbohydrate content (Table 5)  which is consistent with [19][26]. 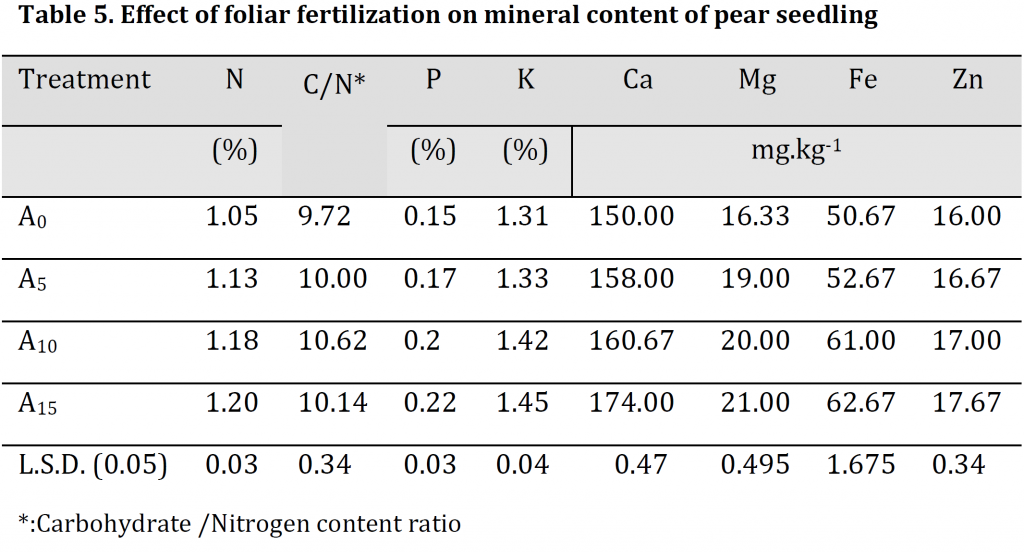 Table 5. Effect of foliar fertilization on the mineral content of pear seedling