The influence of various levels of ammonium to total nitrogen on post-harvest performance of three apple cultivars (Golab Kohans, Gala, and Granny Smith)

Apple is one of the most popular fruit worldwide with a continuous demand for higher quality apples, especially storable varieties. Nitrogen is one of the most important elements in apple growth and production. Additionally, different nitrogen forms can have different effects on plant growth and fruit qualities. In this research, we investigated the effect of five types of nutrient solutions with different amounts of ammonium nitrogen to total nitrogen on post-harvest physiology of apples for two seasons (2016-2017 and 2017-2018). Apple seedlings of three cultivars (Granny Smith, Gala and Golab Kohans) were grown on a soil-based substrate in a factorial experiment of randomized complete block design. After harvesting, the fruit were stored in 0 ○C and 90-95% humidity for 45 days for Golab, 90 days for Gala and 160 days for Granny Smith. Fruit traits were evaluated throughout storage period. The results showed that the increase in ammonium nitrate concentration significantly increased fruit weight, fruit dry weight, and titratable acidity. However, this increase in ammonium nitrate reduced firmness and the amount of total soluble solids with an increase in fruit weight loss index during storage. Furthermore, the results illustrated that the best fruit in terms of storability and postharvest performance were attributed to the nutrition solution without ammonium nitrate.

Apple (Malus domestica Brokh.) is one of the most important common fruit that is consumed to a considerable extent [1], and apple trees are one of the most widely cultivated fruit trees worldwide [2]. Apple production throughout the world is faced with many difficulties for various reasons such as the improper nutrition of trees, harvesting at an inappropriate stage, packing for global markets and the continuous demand for quality improvement [3].

The associated fruit production is a complex operation involving orchard, storage and marketing phases. Long-term storage of this important fruit has become possible due to the introduction of modern post-harvest technologies [4]. However, the quality of stored apples is dramatically influenced by pre-harvest factors such as weather conditions, nutrition [5], in addition to the fruit mineral composition and maturity phase at harvest [6][7][8].

Pre-harvest fruit nitrogen (N) concentrations are a particularly important factor that influences apple quality after harvest [9]. Insufficient nitrogen levels cause a weak vegetative growth and a cell division inhibition, which decreases the plant’s potential to produce a high yield and leads to a loss in fruit quality. Accurate timing and the rate of N fertilizer application play an essential role in plant nutrition [10][11]. Furthermore, the form of nitrogen has a significant effect on the quality and postharvest life of apples, as it was reported that increasing ammonium in Gala and Golab Kohans trees nutrition program had positive effects on fruit size and dry matter percentage, while negatively affected fruit firmness with slight or no effects on total soluble solids, titratable acidity, and pH [12]. Other reports showed that ammonium-based nitrogen fertilizing resulted in the production of small fruit with poor quality, while nitrate-based fertilizer helped developing maturity indices in terms of color, sugar content, and juice acidity [13]. Therefore, finding the perfect balance between nitrogen sources in nutritional programs is crucial to introduce fruit of high qualities [14][15][16]. Therefore, the aim of this study was to investigate the effect of different ammonium content in nutrition solutions on fruit postharvest performance of three apple cultivars (Granny Smith, Gala and Golab Kohans).

The subjects of this experiment were six years old apple trees of the cultivars Golab Kohans (GK), Gala (G) and Granny Smith (GS) grafted on M9 rootstock and planted in 20-liter pots filled with a substrate of soil and perlite. The study was carried out at the Department of Horticulture (University of Tehran) and for two seasons (2016 - 2018). A completely randomized design was used. Overall, the experiment involved five treatments, 3 replicates and 3 views per cultivar for each screening period. For this experiment, five different nutrition solutions with different ratios of ammonium to total nitrogen [NH4+ / (NH4++NO3-)] were used. Solution 1 S1 (Control), Solution 2 (S2), Solution 3 (S3), Solution 4 (S4), Solution 5 (S5) had an ammonium to total nitrogen ratio of 0, 0.08, 0.16, 0.19 and 0.27 meq/l respectively. Full nutrition solutions in addition to microelements compositions can be found in the Supplementary material file (Supplementary Tables 1-5 and 6). The base solutions for the macro elements, microelements, and iron were prepared separately. First stock solutions were prepared with a concentration of 1000 times the final irrigation solution. pH for nutrition solution was controlled used nitric acid (0.2 N) to a degree of 6.5±0.1. In springtime, trees were irrigated three times with an irrigation solution while the rest spring irrigations were pure water. In summer the trees were irrigated once a week with the irrigation solution and twice with pure water. The amount of solution added for each tree was two liters/pot. Fruit of each cultivar were harvested at commercial maturity. In the case of GK (29th June), G (21st July) and GS (18th September), then, they were transferred to cold storage and stored at 0 ± 1 ○C, with 90 – 95 % relative humidity.

Fruit weight (FW), fruit weight loss (FWL), fruit firmness (FF),fruit dry matter (FDM), fruit color changes (FCC), soluble solids concentration (SSC) and titratable acidity (TA) were evaluated directly after harvest and during storage phase.  Overall, four screenings were conducted for GK (0, 15, 30, 45 days) and for G, (0, 30, 60 and 90 days), while five screenings for GS (0, 40, 80, 120 and 160 days) were carried out during storage. Three fruits were randomly selected from each replicate of each treatment per cultivar for each evaluation.

FF (kg/cm2) was measured by removing the skin at two positions of the fruit surface and applying a firmness tester (penetrometer) equipped with an 8 mm conical plunger. To measure dry matter, 4 – 5 g slices were prepared from a third midway part of the fruit. After weighing, the slices were placed in an oven at 70-80 °C for 72 hours until a constant weight was obtained. The dry matter content was calculated using the following formula:

Fruit were juiced and SSC was measured using a drop of the extracted juice from each fruit on a hand-held refractometer (Atago N-32, Tokyo) at laboratory temperature.  The results were expressed as a percentage. TA was determined by titration of 5 mL of filtered juice by 0.1 N NaOH up to a pH of 8.3. Fruit color was evaluated using a Colorimetric device (Minolta model CR-400).  At every stage, readings were taken from two opposite points on the fruit, and the color parameters L *, a *, b * were measured in addition to Hue and Chroma. FCC was then calculated to determine differences in fruit color throughout storage.

The results showed a significant fruit weight decrease in all cultivars between the first and last days of cold storage (Table 2) and (Fig 1 A). The reasons for this decrease were water loss and respiration [18].

The results revealed that there was a significant increase in FWL with the addition of ammonium nitrate in the nutrition solution. The highest FWL was found in fruit from trees fertilized with S5 solution which recorded 11.84, 6.09, and 4.23 % weight losses with GK, G, and GS respectively, while the lowest FWL appeared in fruit of trees fertilized with S1 (for GK with 6.43% and G with 4.04%) and S2 (for GS with 3.28%) as seen in (Table 1) and (Fig. 1 B). These results refer to the negative significant effect of the increased ammonium nitrate in nutrition solution on post-harvest performance by inducing an increased weight loss during cold storage.

FF is considered an important fruit quality trait that affects the value and marketing of apples [19][20]. The lack of FF is a serious issue in terms of fruit quality losses [21]. In this research, the data at the harvest stage showed the highest value of FF for all cultivars with GS being the firmest with 6.07 kg/cm2 followed by G with 5.23 kg/cm2 then GK with 4.21 kg/cm2 (Table 2). The difference in the firmness of apple cultivars is mostly related to their pectin installation architecture [22].

The comparison between the different nutrition solutions showed that the maximum value of FF was found in apples from trees fertilized with S1 (control) with values of 3.39, 5.45, and 5.19 kg/cm2 for GK, G, and GS respectively, while the minimum values were observed in the products of those fertilized with S5 which recorded 2.56, 3.58, and 4.7 kg/cm2 for the same cultivars respectively (Table 1). Similar results were obtained by [26] referring to the negative effect of ammonium on fruit firmness during storage. 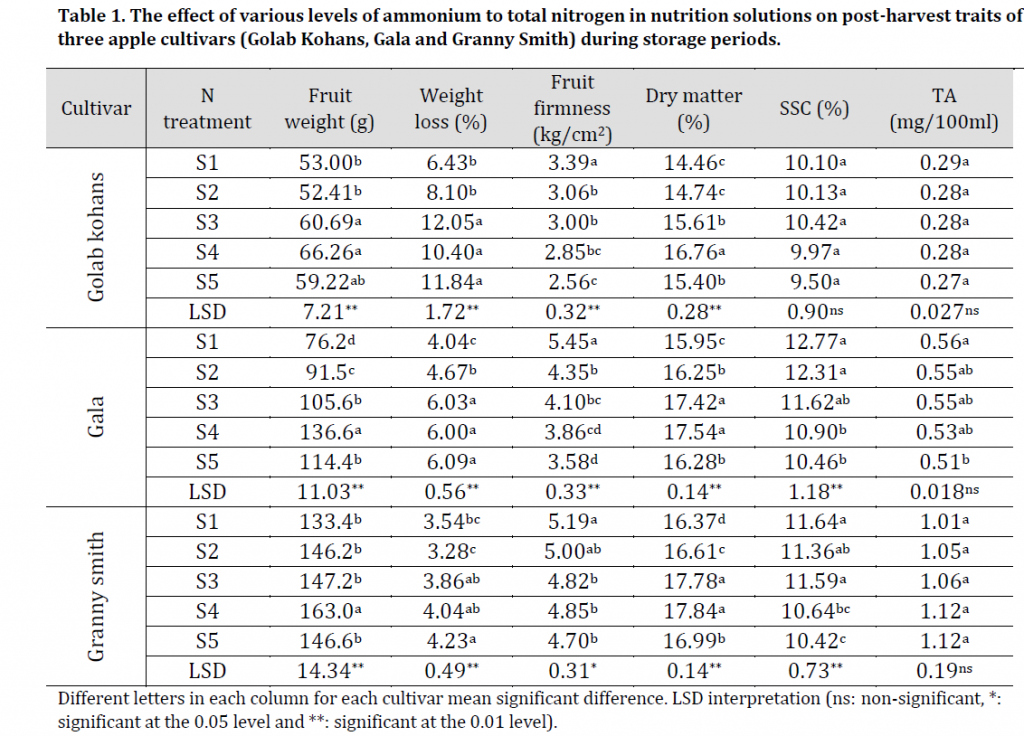 Table 1. The effect of various levels of ammonium to total nitrogen in nutrition solutions on post-harvest traits of three apple cultivars (Golab Kohans, Gala and Granny Smith) during storage periods. 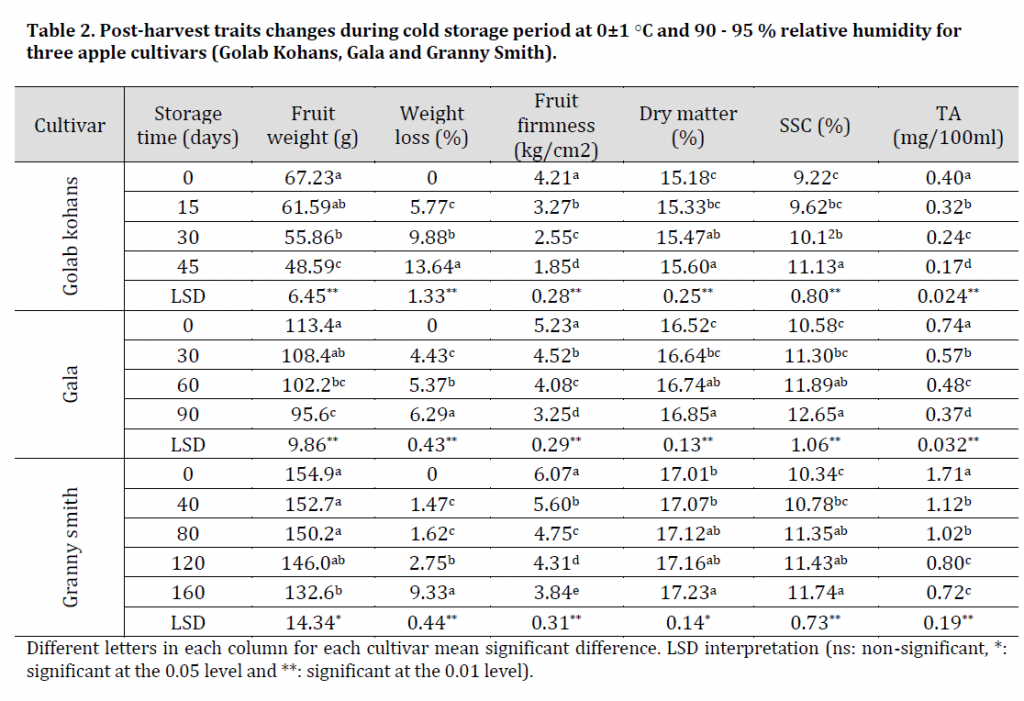 The data showed that the increasing ammonium content in nutrition solution treatment had no significant effect on SSC for GK; while on the other hand, it had a significantly negative effect on the SSC of G and GS cultivars (Table 1). The highest values of SSC appeared in apples from trees fertilized with S1 (control) with SSC values 10.1, 12.77, and 11.64% for GK, G, and GS respectively, while the lowest values of SSC was found in apples from trees fertilized with S5 with values of 9.5, 10.46, and 10.42%  for the same cultivars respectively (Table 1). These results are similar to [31] reports of a deceased SSC by increasing nitrogen concentration in soil.

Acidity is considered one of the important taste and shelf-life factors in apple fruit [32]. In our investigation, a significant decrease in TA during storage period was observed in all cultivars. The maximum value of TA at harvest and during storage was found in GS with a TA of 1.71 mg/100ml, which is considered a trademark for this cultivar, while the minimum value was found in GK with 0.40 mg/100ml (Table 2). Our results contradict [30] results of no significant changes in TA during storage period.

The increased nitrogen content in our nutrition solutions had no significant effect on TA at harvest and throughout storage period (Table 1), which is similar to the reports of [31].

Visually, it can be noticed that with the increase in nitrogen content in nutrition solution using ammonium-based nitrogen produced fruit with lighter skin color (Fig. 1). This result is in agreement with [33] stating that the lower value of red color in apples was noticed in fruit from trees fertilized with 80 g N/tree compared with those fertilized with 40 g N/tree. Furthermore, slight visual changes can be noticed in each cultivar throughout storage period as all fruit became slightly darker in color. This might be due to storage pigmentation oxidization. 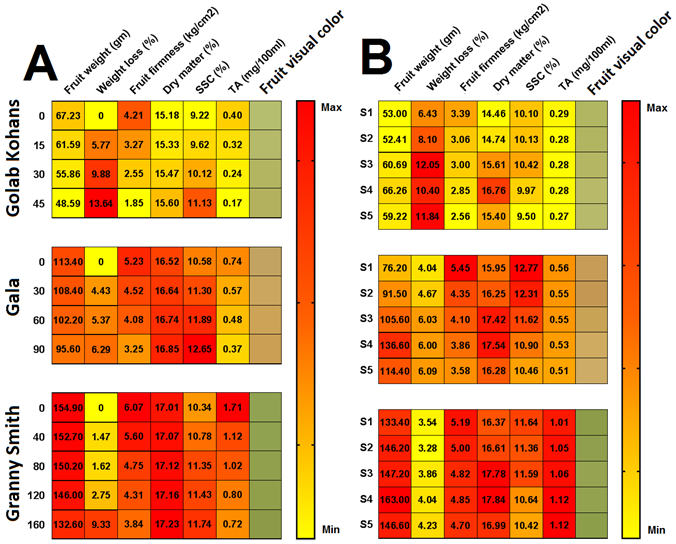 Figure 1. Mean values of the studied traits for the three cultivars of (Golab Kohans, Gala, and Granny Smith) against different storage evaluation stages (A) and the different used nutrition solutions (B). The scale to the right refers to the colors correlated with maximum and minimum values in each trait. Fruit visual color is a digital identification for colors obtained from Colorimetric device and has no relation to the scale. 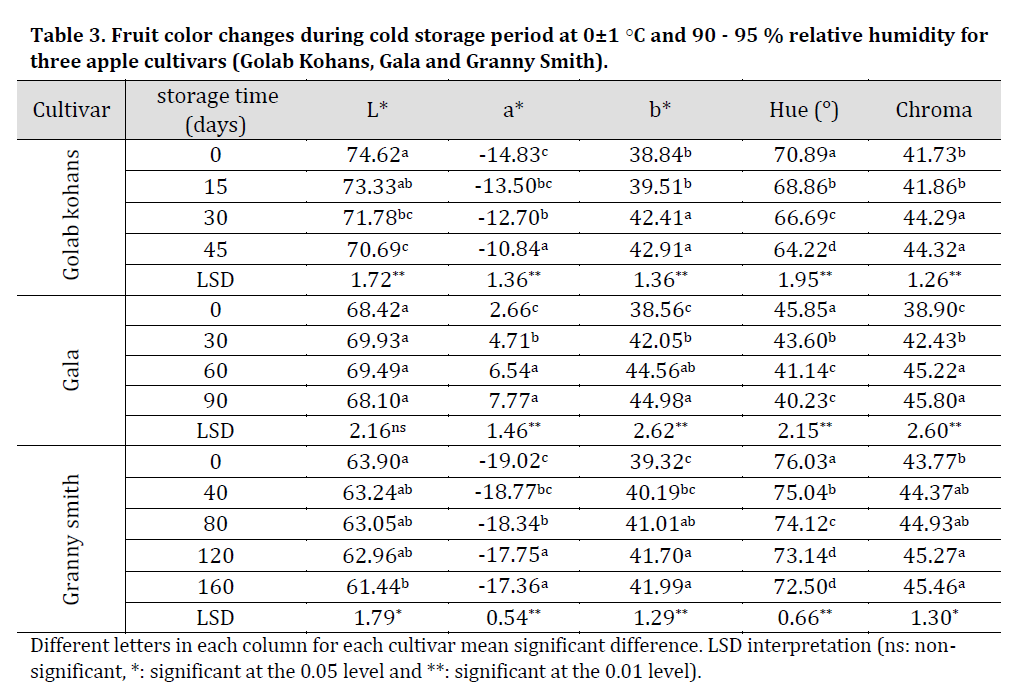 The results of this investigation revealed that by increasing the nitrogen content in apple trees nutrition solutions using ammonium-based fertilizers can increase fruit weight and fruit titratable acidity. In addition, increasing nitrogen induces the production of lighter-skinned fruit. However, excess nitrogen significantly reduces soluble solid content and fruit firmness which leads to more weight losses and deterioration during cold storage in comparison to low nitrogen nutritional solutions. Therefore, it can be concluded that omitting ammonium-based nitrogen from the nutritional solution of apple trees can enhance fruit post-harvest performance.