The continuous growth in the world population raised the need for agricultural productions to increase. This increase cannot be fulfilled without the use of fertilizers. These fertilizers are used around the world and usually in extensive amounts to increase crop production. Phosphorus fertilizers are essential for plant nutrition. These fertilizers are manufactured from phosphate rock. The crucial point about phosphate fertilizers that is usually overlooked, is their relatively high content of uranium‐238 (238U), radium‐226 (226Ra), thorium‐232 (232Th), and potassium‐40 (40K) radionuclides in addition to various heavy metals [1-6]. These elements accumulate in the soil through years of extensive usage and might generate a serious environmental hazard [7-11]. Therefore, it is highly important to assess the radiological hazards of phosphate fertilizers usage [12][13].

Previously, various studies concentrated on the potential risks of cultivating or being exposed to lands fertilized excessively with phosphate fertilizers. For example, [13] found that the average concentrations of 40K, 238U, and 232Th were significantly higher in fertilized areas compared to areas where no fertilizers were used. The impact of NPK fertilizer on the activity concentration in sugar beet crop and soil has been studied by [14] they concluded that there was a positive relationship between the content of 226Ra, 232Th, and 40K in both soil samples and sugar beetroot with the added phosphate fertilizers rate.

In Iraq, phosphate fertilizers use has resulted in an outstanding increase in agricultural production. Therefore, its consumption has increased rapidly in the last years, mainly due to the high yield generated from using low-cost fertilizer. This increased use of phosphate fertilizers, especially imported ones that are rich in natural radionuclide, resulted in a change in the radiological level of the Iraqi soil which varied based on usage rates [15].

Taking into consideration the aforementioned facts, it is fundamental to evaluate the radiological risk of fertilizers in Iraqi agricultural soils from a health point of view. Therefore, the current study aimed to assess the effect of fertilizers on the soil radiation level and to evaluate the possible health hazards attributed to these soils to persons working in the fields.

The experiment was carried out in the Latifiya region, agricultural research station of the Department of Agricultural Research, 35 km south of the capital, Baghdad-Iraq. Soil samples were collected from 15 non-fertilized and fertilized agricultural locations in the region. Different crops were grown in the fertilized land (10 locations in total) and variety of fertilizers types were used such as Ammonium phosphate Mono-ammonium phosphate (MAP), Di-ammonium phosphate (DAP), Triple Super Phosphate (TSP), and Nitro Phosphate Potash (NPK) of both Iraqi sources and imported. All crops were cultivated under the fertilizer application recommended by local farmers to improve crop productivity. Samples were also collected from 5 non-fertilized (fallow) lands where no crop was grown for many years. Soil samples were collected from depths of 0-30 cm. Soil samples were packed in polyethylene bags and transferred to the laboratory. Plant roots and stones were separated from the samples. The samples were then dried under sunlight for two days to remove the moisture and then in an oven at 105°C for 24 h until fixed weights were reached. The samples were homogenized by grinding and sieving through a 2 mm mesh. The sieved soil samples (1 kg) were transferred into Marinelli Beaker plastic containers which were then sealed with plastic tape to prevent airflow from the samples and stored for one month before measurements, thereby, allowing the Bismuth 21Bi and the Thallium 208Tl to reach a general equilibrium with Uranium 238U and 232Th and their respective daughters and to ensure that the radon 222Rn and 220Rn are confined within the volume.

The natural radioactivity concentrations for the collected soil samples were measured with a high purity germanium detector (HPGe) connected to a multichannel analyzer with high voltage. The gamma spectrometry was enclosed by a cylindrical lead shield. Gamma energy and efficiency of the system was calibrated using a standard gamma source from the International Atomic Energy Agency (60CO, 137Cs, 22Na, 241Am, and 226Ra).

The activity concentrations of 226Ra, 232Th, and 40K were then calculated using the equation [16]: 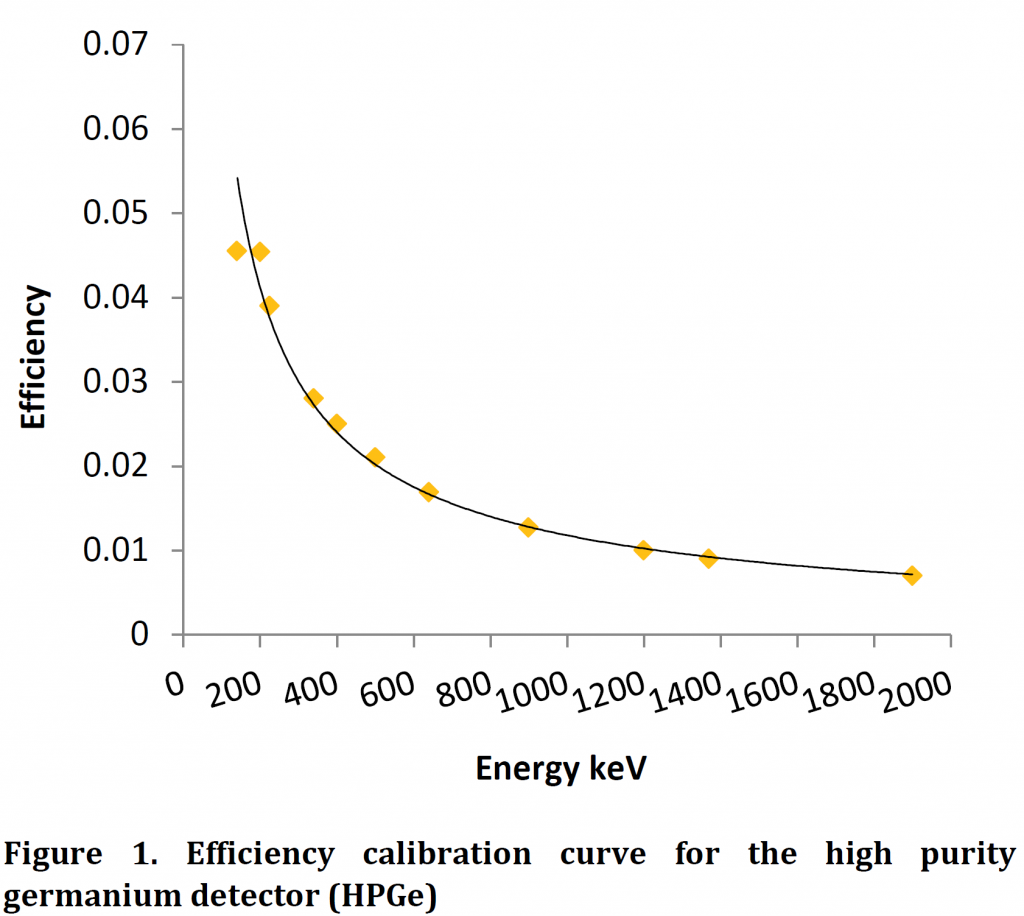 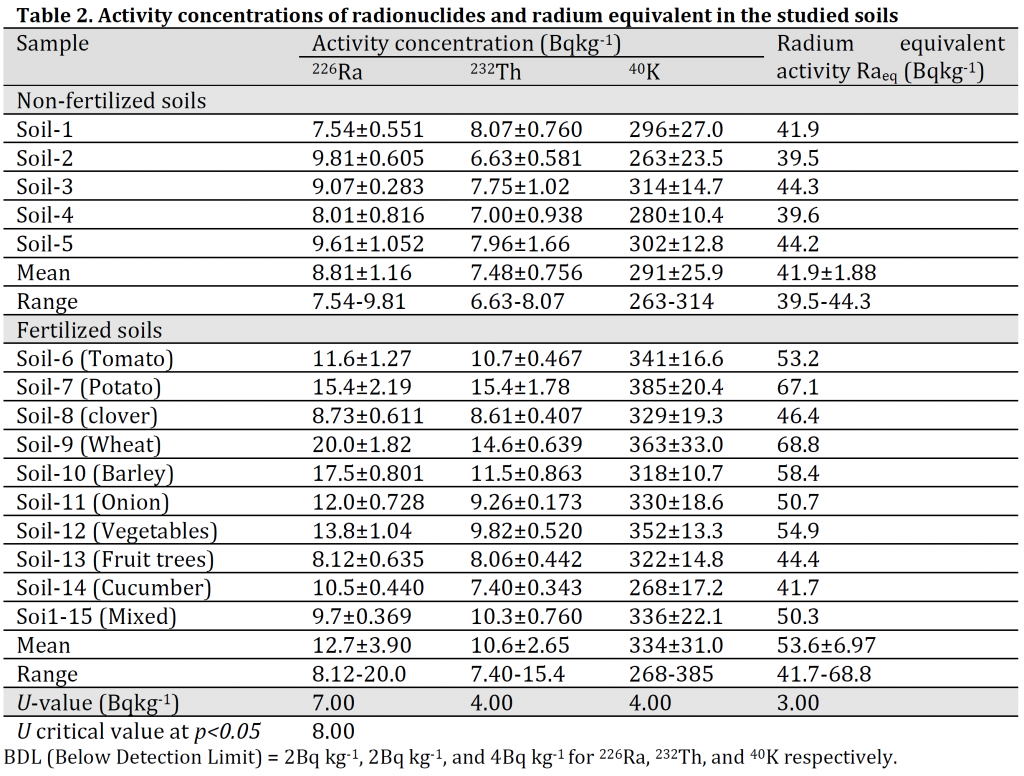 Table 2. Activity concentrations of radionuclides and radium equivalent in the studied soils

Radium equivalent activities (Raeq) were calculated to evaluate the radiological risk attributed to the obtained concentrations according to the equation [24]:

ARa, ATh, and AK are the activity concentrations of 226Ra, 232Th, and 40K (Bqkg-1), respectively. The highest and lowest values of Raeq in fertilized soils were observed in wheat and cucumber (68.8 and 41.7 Bqkg-1) respectively. Overall, the mean Raeq in the fertilized soil samples was 53.6 Bqkg-1, whereas, in non-fertilized soils, it ranged from 39.5 to 44.3 Bqkg-1 with a mean of 41.9 Bqkg-1. From these results, it can be concluded that the radium equivalent activity in the soil samples collected from fertilized soil samples was on average 39% higher than non-fertilized soils. This increase was significant in general according to the obtained U-value at p<0.05. However, the average values of Raeq in this studied soil samples were found to be below the accepted value of 370 Bq Kg-1 recommended by the United Nations Scientific Committee on the Effects of Atomic Radiation (UNSCEAR)[23] Therefore, these values do not impose a radiological hazard to farmers.

Activity concentrations for 226Ra, 232Th, and 40K measured were converted into doses (nGyh-1 per Bqkg-1) by applying the factors 0.462, 0.604, and 0.0417 to the above nuclides, respectively according to [23]. These factors are used to measure the overall absorbed gamma dose in the air at one meter level above the ground. The outcome parameter can be used to estimate radiological hazard and radiation exposures from radionuclide in the soil using the following equation:

Where, CRa, CTh, and CK are the radiological concentrations (Bqkg-1) of the existed 226Ra, 232Th, and 40K respectively. The annual effective dose rate (AEDR) can then were calculated (multiplying by 8760) then, a human effective-dose equivalent conversion factor of 0.7 SvGy-1 was considered with an occupancy of 20% and 80% for indoors and outdoors respectively to calculate the received annual dose [23]: 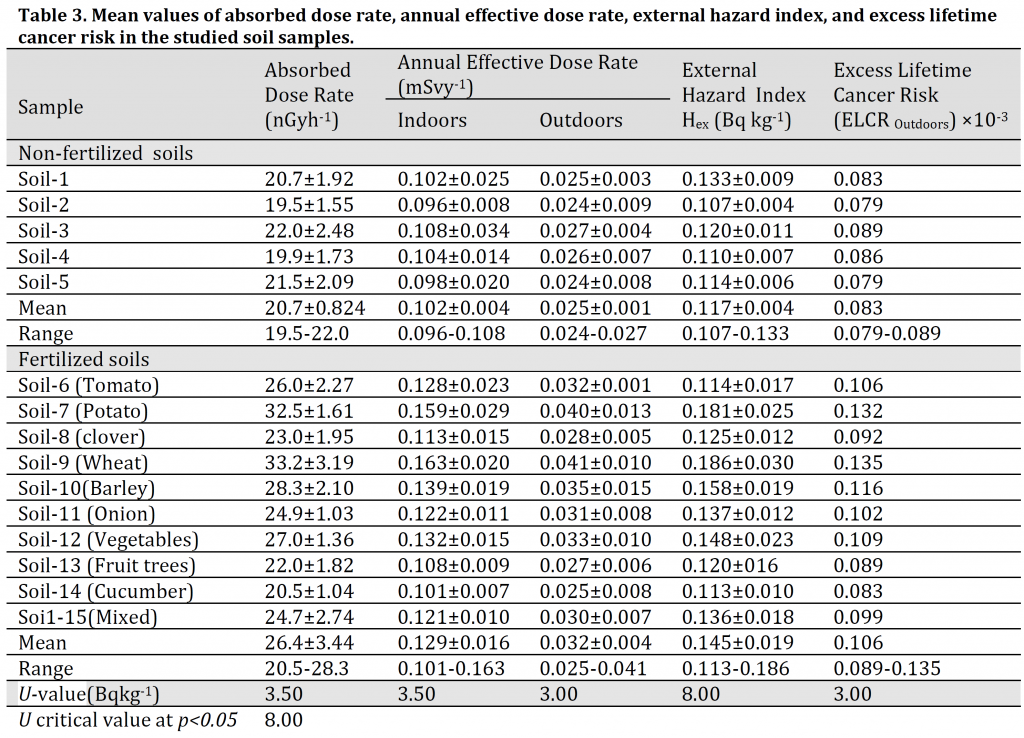 The external radiation hazard index (𝐻ex) (BqKg-1) represents the external radiation exposure associated with gamma irradiation from radionuclides of hazard concern. The resulted 𝐻ex should be less than the maximum acceptable value of 1 to be considered insignificant [23]. This index can be calculated and evaluated using the following semi-empirical formula [23].

External hazard values ranged between 0.113-0.186 in fertilized samples which were below the criterion value (<1). The average external radiation exposure in agricultural soils that used different chemical fertilizers reached (0.145±0.019 Bq kg-1) with a 19.3% increase compared to the average (0.117±0.004 Bq kg-1) of non-fertilized soil samples (Table 3).

Fatal cancer risk per Sievert is 0.05 according to [26]. The ELCRoutdoors ranged from 0.079×10-3-0.089×10-3 with an average value of (0.083×10-3) in non-fertilized soils. On the other hand, it ranged from 0.089×10-3 to 0.135×10-3 with an average of 0.106×10-3 in fertilized soils. The average excess lifetime cancer risk index in fertilized agriculture soils was 20% more than that of non-fertilized soils. This difference was significant according to the Mann-Whitney U test (p<0.05). However, ELCR in fertilized soils was well below the permissible level of 0.29×10-3 [23]. The results of various similar studies can be seen in (Table 4) for comparison with the current study. It can be noticed that the values reported in the current study are lower than those of other studies which might be attributed to lower and more reasonable rates of fertilizer usage in the studied area.

The current study illustrated that 226Ra, 232Th, and 40K were higher in agricultural fertilized soil compared to those in non-fertilized sites in Latifiya region, which underlined the effect of fertilizers in transferring natural radionuclides to the soil. Therefore, radiological hazard parameters were investigated.

The studied radiological hazard parameters: radium equivalent activity, absorbed dose rate, annual effective dose (indoors and outdoors), external hazard index, and excess lifetime cancer risk in agricultural fertilized soil collected were also significantly higher in fertilized soil samples compared to the non-fertilized soils. However, the levels of these indices in both soils were below the reference limits proposed by UNSCEAR.

The current work concludes that fertilizers were being used in reasonable rates and therefore, the radiation status did not pose any threats to the residents.